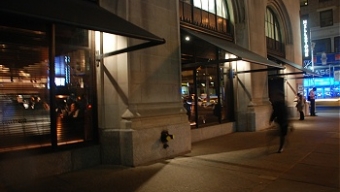 The space formerly known as Houston’s (pronounced like the New York City street or like the Texas city?) underwent little more than a simple name change when it became Hillstone in 2010 as the restaurant group which owns similar restaurants around the country was focused on a re-branding reboot. The new name aside, and the place and apparently its consistency haven’t changed much since then, bringing quality American style fare to the Flatiron District in an area of Park Avenue bereft of much else. Based on some of its pricy menu Hillstone fares well in serving the suit and tie crowd, and as you’ll read, capably keeps the rest of us relatively content as well.

Hillstone sits on the ground floor of an old corporate building, a fitting space considering its surroundings. Inside the restaurant the plush booths, dim lighting, and long rectangular bar meanwhile resemble a lobby bar and restaurant, although the place is far more spacious than that would seemingly imply. Dark mahogany tables are surrounded by soft leather chairs and half circle padded booths to create a very business like setting during lunch or dinner hours. In many ways, Hillstone is actually an ideal place to conduct business because of an atmosphere that exudes such professional refinement. You hate to label Hillstone as a chain, but if it is, it’s certainly one of the classiest of the non-steakhouse variety.

As we arrive, the bar is buzzing without as much as even one available seat. Our party of three grabs a few pours of “Forefront Pinot Noir” ($12) and casually chats standing behind the fracas but our table is soon ready and we are walked throughout the expansive space. We pass by table after table of tasty looking entrees as well as a full sushi bar, a surprising touch. Unfolding our cloth napkins, our party of three sits down and sets our eyes on the menu, made up of American inspired staples – salads, burgers and sandwiches, and entrees. The “Grilled Artichokes” are brought out first, plated by a side of house made remoulade. Sliced bulbously into three, each stripped leaf is delicious when dipped into the creamy accompanying sauce, but is probably overpriced for what it is at $15.

Similarly, the main courses meanwhile were comparable in that some of the fare was particularly tasty assuming that diners are comfortable at these price points. The “Miso Glazed Atlantic Cod” at $32 was too sweet for our taste. The finely cooked fish was bathed in its sticky sauce whose flavors fortunately, the side of scrumptious seasoned rice and bok choy were able to equalize. Meanwhile, the “Hawaiian Rib-eye Steak” ($38) was not as syrupy, despite a pineapple ginger soy marinade. Served at a perfect medium rare with the appropriate char marks on both sides of the sizable cut, the steak was presented beautifully and complimented on the plate by a loaded baked potato. Fine for what it was, the ribeye was hardly the standard you’d expect from a top of the line steakhouse, but that said, it capably held its own here. Side orders of “Shoestring French Fries” ($7) and creamy “Cole Slaw” ($7) appropriately set the table for our favorite dish- the “Hillstone Burger” ($19). Hillstone’s fresh burgers are made of chuck steak ground in house each day and served on their house made egg buns. The medium rare burger meat was especially savory, topped with melted cheddar cheese and in a slice of Americana- pickles, lettuce, tomato, and diced raw onion. Opting for some health consciousness, we selected a “Kale Salad” decorated with creamy roasted peanut vinaigrette as our side, but the French fries were the standout here.

Dining out is all about managing expectations and if you’re looking for a decent place to dine in Flatiron- be it for tourists or for working meals during or after hours- you could certainly do a lot worse than Hillstone. It’s equipped with a classy ambiance and there’s an array of menu options likely to suit any diner’s palate. That said, for locals, Hillstone is perhaps best suited as a last resort rather than a destination. The food being served is far pricier than the finished product on the plate would suggest and that’s something that an aura of sophistication can’t even make up for.