The Dutch: A LocalBozo.com Restaurant Review 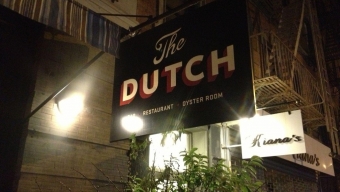 The Dutch
17 Sullivan Street at Prince Street, SoHo
212-677-6200
Getting There: C,E to Spring Street
http://www.thedutchnyc.com

A middle ground of modern and classical is what you’ll find inside Andrew Carmellini’s much bandied about restaurant The Dutch, on Sullivan Street. While his more recent opening Lafayette has certainly deflected attention away from his previous openings, The Dutch and sister restaurant Locanda Verde remain as popular and subsequently as trendy as ever. Conceptually, the restaurant is focused on serving classed up American style comfort fare and although the place is not necessarily swanky per se, The Dutch tends to exude a stylishly cool feel that is all its own.

Like many of Carmellini’s restaurants, procuring a reservation can be a bit tricky despite some tables set aside for walk-in visitors on a nightly basis. But on this night, we’re feeling lucky and on relatively short notice, we jump on a 10pm opening and head downtown. Pleasantly, our table is ready upon our arrival and we walk the dimly lit space from the host stand toward our table, which alternates between white painted exposed brick and rich maroon colored walls.  The restaurant’s main dining area is outfitted casually with wooden tables and chairs and plush black booths for larger parties. The Dutch also offers a seven seat Oyster Room with an intimate L-shaped raw bar surrounded by high top stools for more relaxed dining.

The menu meanwhile is a tasteful take on classic plates- eschewing the usual run of starch-filled cliches like macaroni and cheese and mashed potatoes, for the more sophisticated alternatives like “Little Oyster Sandwiches,” ($5 each) “Steak Tartare” ($17), and a delicate “Smoked Ricotta Ravioli” ($19) instead. With the Oyster Room nearby, we loaded up on a half dozen oysters from the northeast – “Blue Points,” “Moon Shoals” and “Naked Cowboys”- priced at $3 each but The Dutch is hardly limited to your run of the mill cold sea fare-  “Island Creek Clams” ($2.50 each), “Sea Urchin” ($11), and even a “Lobster Cocktail” ($21) all make an appearance here.

But save your appetite for the main course or the “Seconds” portion of the menu, which is unequivocally not to be missed. The Dutch’s mouthwatering “Colorado Lamb” ($34) was perfectly cooked, and tenderly served with a brothy brown drizzle. Plated alongside eggplant and deliciously roasted garlic, each slice of meat was both juicy and rich, meshing the naturally salty cuts of lamb meat with the garnish of sweet birch leaves. Speaking of rich, the quintessential standout of the meal was aptly named, the “Duck” ($32). Served with its salty skin still in tact, the absolutely impeccably prepared dish was topped with a creamy foie gras atop an array of pickled cherries and polenta. The succulently sliced duck meat ranks alongside the finest we’ve tasted anywhere in Manhattan, not a surprise considering the culinary master behind its creation. While the side of “Warm Organic Spinach” ($9) was a bit underwhelming, despite being joined by shaves of mushrooms, bacon, and egg, our sharing of entrees more than made up for any discontent.

With as good of a recent track record as any Chef/restaurateur in New York City, Carmellini’s The Dutch is a perfected endeavor into culinary classics. The ingredients utilized are hardly fancy or nouveau- rather, they are used appropriately and properly- never seemingly trying too hard or being too experimental. No, The Dutch manages to do things just right in their food prep, service, and outstanding quality. And that’s truly, the American way.

From the Oyster Room