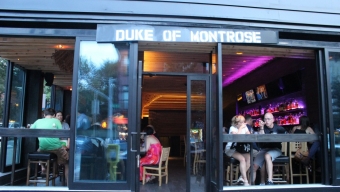 Every single Friday morning we’ll be taking over where our own Link Cromwell’s Spirits in the Sixth Borough” left off, showing you distinctive bars in each New York City borough perhaps for the very first time, perhaps to refresh your memory of a fun place you’ve ducked into, or perhaps to suggest a new spot for you to check out. You can follow our travels as we approach each weekend on Friday mornings with LocalBozo.com’s “Drink Here Now.”

We surveyed the surrounding bars in the area on an early evening before noticing the newly opened bar. Duke of Montrose’s open windows in seasonal weather and corner location make it an absolutely ideal destination for people watching, but it’s also an attractive exterior from the street. Once inside, the bar boasts five big screen televisions above the main bar area, behind which the place’s mixologists are slinging together refreshing cocktails. The opposite side of the bar features window side seating with some tables thrown in the mix as well for larger parties.

But ultimately, Duke of Montrose is cool for two reasons. First, its selection of whiskys is absolutely unbeatable in the area. But for the more casual drinker looking for a place that just feels new, the bar is an architectural masterpiece. With a duplex style second level looking down upon the entire bar, the interior is relatively small at first glance but feels much bigger than it is. Plus, the bar is a sister to the Upper East Side’s Caledonia Scottish Pub which has been slinging drinks since 2011 and Williamsburg’s Isle of Skye, so the owners know a thing or two about bringing quality to their customers. And with more than 100 different varieties of whisky, whether you’re an expert or a novice, you’ll find something that suits you here.

Bar Type - A modern take on a Scottish pub- but a whisky bar true and true.

When to Visit – While the weather is still comfortable, daytime drinking is always advisable and especially inside of a bar with such an open air setting and comfortable vibe. But the bar is also brand new, so you won’t go wrong whether making this your first stop, last stop, or entire night’s destination.

Value – Beer and cocktail prices are about on par for the area, which is neither expensive nor cheap. But they have a whisky available at $75, so unless you own or coach a team that plays at the Barclays Center, just grab a draught beer and call it a day.

The Lowdown -Duke of Montrose was a highly anticipated opening in Park Slope and in the two months or so it’s been open, the reviews seem to be mixed. Perhaps those are clients with an axe to grind and fail to appreciate a neighborhood gem. With a tasty cocktail program, a good selection of draught beers, and a bar that’s both casual and distinctively designed, Duke of Montrose feels modern in an area that is really developing. Some people might scoff at new developments, while what we really should be doing is appreciating them.