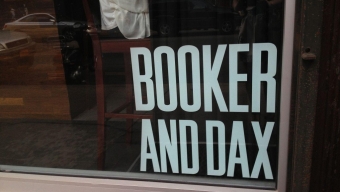 Every single Friday morning we’ll be taking over where our own Link Cromwell’s Spirits in the Sixth Borough” left off, showing you distinctive bars in each New York City borough perhaps for the very first time, perhaps to refresh your memory of a fun place you’ve ducked into, or perhaps to suggest a new spot for you to check out. You can follow our travels as we approach each weekend on Friday mornings with LocalBozo.com’s “Drink Here Now.”

Inside, seats at the bar are optimal. Tables are perfectly fine if you’d like to casually chat with your guests but at the bar you really get to watch the lively staff work its magic. It matters not if you’re ordering their perfectly prepared “Manhattan” or the space’s unique drinks like the “Tea Time,” infusing milk-clarified tea vodka and lemon (it’s delicious), the preparation is as much fun to watch as the drink is to taste. Whether your drink is literally being put on fire before being served or hazily concocted with liquid nitrogen, the selection of cocktails is vast and utilizes every imaginable liquor inventively. And the “Snacks” portion of the menu runs the gamut from “Kimchi Deviled Eggs” to large plates of charcuterie to the delectable plate of “Seasonal Pickles”- upscale bar snacks to nosh on while tasting distinctive drinks.

To no surprise, it costs a lot for the pomp and circumstance and at upwards of $14 a drink, there’s little in the way of value here. But as long as you understand that going in, Booker and Dax is an impressive place for a pre-dinner drink, an after dinner cocktail, or a destination on its own- to stop in, take in some of the restaurant’s small bites, and kick back in nonchalance in arguably Chang’s trendiest space.

Bar Type - This is a small modernized cocktail spot in an area of town that has a dearth of similar types. The Mixologists here genuinely enjoy crafting each drink, making you wish you were as inspired about your own job.

When to Visit – Any night during the week is likely to be a winner here. Momofuku Ssam Bar is perpetually mobbed and spillover will drip into Booker and Dax. But if you head over right after work, it’s probably the best time to sample everything the place has to order.

Value – Cocktails are made by Mixologists using high quality ingredients. The drinks are around $14. If you want value, head around the corner frat boy!

The Lowdown - Since opening in 2012, Booker and Dax has remained a vital part of the New York City cocktail scene despite a flurry of openings since then. But under the Momofuku umbrella, there’s a certain quality you expect and here, it’s delivered wonderfully. Again, the drinks are not necessarily cheap, but it also won’t kill you to put down a bottle of domestic draught one evening and head somewhere that’s effectively different and also special. It’s modern and innovative and more importantly, it’s fun- no matter how long you decide to stay.