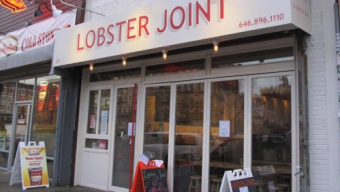 The scorch of July now has us thoroughly entrenched in the throws of summertime, where few things taste as seasonally delicious as a soft serve ice cream cone, a fresh off the grill hamburger, a crisp refreshing golden beer, and a perfectly crafted lobster roll. With the surrounding boroughs each sporting their own distinctive spots, a staple of Greenpoint Brooklyn and Rockaway Beach made its first foray into Manhattan toward the tail end of 2012, opening another of its outposts in the Lower East Side. And for the better part of this year, Lobster Joint’s quaint and casual persona has become a downtown staple right alongside the likes of Russ & Daughters and Katz’s Delicatessen.

The plain white awning with red lettering is surprisingly eye catching despite the busy bodies surrounding Houston Street, similar to a hole in the wall you’d expect to find in a seaside town. The front of the house’s floor to ceiling windows illuminate the entirety of the place with much welcomed natural light, shining onto both the picnic table seating and the small but perpetually busy L-shaped bar inside. The white tiled walls line the restaurant as a border, while perfectly framing the large handwritten menu for ordering ease. Once inside, diners are welcomed to the front counter for cashier side ordering at the bar before a waitress brings out a tray of food, once your table has been secured.

Despite the laid back setting, ordering up seafood anywhere in Manhattan can tend to be a bit pricey. That said, much of the menu falls under $20 with the exception of the steamed 1.5 pound “Lobster Dinner” ($34) and their inventive “Lobster Shepherd’s Pie” ($21). Beach side staples like raw bar items, “Fried Clam Strips” ($8), crab cakes, and all the fish you can handle (“Filet o’Fish Sandwich” ($12), “Sauteed Pollock” ($14), “Salmon Sandwich” ($12), are all over the menu alongside burgers, chicken and vegetarian options for seafood despisers.

We grabbed a table and quickly found the object of our search with Lobster Joint’s “New England Lobster Roll” ($17). Distinctive from the restaurant’s “Connecticut Lobster Roll” (Also $17) which is served warm with butter, the New England variety comes chilled, tossed lightly in an herb mayonnaise with celery. The bulbous portion heaped out of the diminutive but delicious bun, with chunks of fresh lobster meat falling out onto the surrounding plate garnished by a bed of crisp garden salad and a pickle, designed to catch the fall of each piece. Pleasantly, the handheld delicacy was so lightly drizzled in mayo that the flavors of the lobster coupled with hints of herb were allowed to stand out on their own merits, enveloped in a moist fluffy toasted bun. Additionally, Lobster Joint also has a fantastic selection of craft beers on draught, making the “Blue Point Summer” ($6) and “Allagash White” ($6) ideal compliments for each bite of our shared sandwich.

There is no shortage of local eateries popping up that offer similar fare, but Lobster Joint’s penchant for authentically prepared lobster rolls has to place them at or near the top of any seafood lover’s list for fast casual dining. The atmosphere inside is both energetic and fun. The beer and cocktail program is unique and surprisingly affordable. And best of all, the quaint little spot acts as a perfect respite from a sweltering summer in the City. Lobster Joint immediately brings you to a beachfront town, without having to board a jitney to get there.