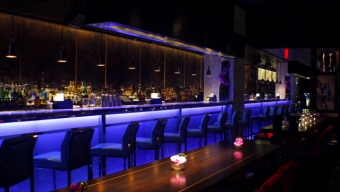 When Hakkasan finally made its arrival in Manhattan more than a year ago, seemingly every fussy eater emerged from the woodwork to proclaim its premature demise. From the restaurant’s massive size, its intricate décor, and perhaps worse- the categorical renouncement of its food as both overpriced and underwhelming, the Asian influenced marble-laden palace initially failed to find its audience in New York as it had in places like Las Vegas and Miami, in addition to its flagship in London, where reservations are hard to come by. But a long overdue trip by our outlet proved as it has time and time again that it is essential for critics to be ignored and to let some experiences speak for themselves.

Hakkasan is certainly housed in a relatively peculiar location on 43rd Street, still within the throws of the Port Authority Bus Terminal and the Times Square bustle. But the restaurant lies on a block unto itself, isolated from much to compete with it for business nearby. Inside, the place’s sheer size has no peer in New York City- think Budakkan perhaps. The marble white walkway seems endless in the approach to the host stand. Walking to your table is also a hike as you explore each bar and lounge and every nook and cranny inside of Hakkasan. The décor is sleek and elegant however, despite the restaurant’s sprawling space which feels more like Vegas than Manhattan.

The number of menu options is similarly as staggering with an endless supply of Chinese and Asian inspired staples from vegetables and rice dishes alongside the likes of a “Whole Peking Duck with Kaluga Caviar” which is even too luxurious for us to begin to write about. While the menu is wide ranging and is pricey in parts, we were determined not to allow the latter to affect our dining experience because frankly, there are affordable options at Hakkasan that make the menu palatable on any budget. With that in mind, we’d heard plenty of buzz about the restaurant’s famed “Hakka Steamed Dim Sum Platter” ($24) and we threw caution to the wind. $24 for an appetizer does seem a bit excessive but pleasantly, after the first taste, we dove right in to each distinctive dumpling pair. Black pepper duck, scallop shumai, prawn and Chinese chive and a shrimp har gau were absolutely scrumptious even when sauceless, allowing the flavorful noodles to pair brilliantly with the beautifully plated seafood. Each of the eight tender pieces proved equally excellent and a must try for any visitor to the restaurant. Combining pistachios and pinenuts, the “Stir-fry Mushroom Lettuce Wrap” ($14) was delivered with six fresh elongated lettuce leaves for enveloping makeshift vegetarian tortillas. Perfectly sized at the price, the dish offered a far heartier consistency than anticipated and a collection of tangy flavors that stood out amongst the blander dishes of this ilk that we’ve been accustomed to eating through.

Speaking of flavorful dishes, we admittedly had a difficult time settling on a main course- but the “Stir-fry Chilean Seabass with Sanpei Sauce” ($36) paired elements of sticky and sweet with a fiery kick, admirably. Glazed in a Szechuan peppercorn sauce and stocked with Thai basil, the soft filets of perfectly prepared fish pulled apart seamlessly and each bite was ensconced in mouthwatering flavors. Decorated colorfully by scallions peppers and onions, the generous portion made for and endless base of saucy lapping for the similarly delectable “Chicken and Crispy Fish Fried Rice” ($15) ordered up as a side dish. The long white spoon protruding from the bulbous white bowl proved essential for bringing the sauce to the rice and vice versa. Tasty and filling- but more importantly not overly fried nor greasy- the tender chunks of white meat chicken and each crunch of fried fish proved to be an essential compliment for the spice and sweet flavor profile offered by our main entrée.

Hakkasan is hardly your run of the mill neighborhood Chinese spot, unless of course you’ve got an endless supply of zeroes in that Capital One account of yours. That said, you will be hard pressed to find a more diverse collection of Asian inspired fare that is consistently excellent as you’ll find here. Yes the prices can be excessive. Yes the place is gigantic. But at the end of the day, Hakkasan delivers some truly outstanding cuisine. And anytime you decide to leave the confines of your small apartment for a night out to dinner, that’s the outcome that we should all be so lucky to enjoy when dining out in New York City. It’s not often the case, regardless of what you’re spending- unless of course you’re dining here.