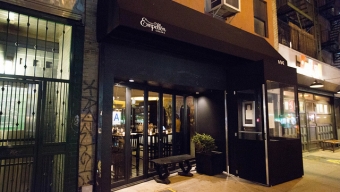 Breathing fresh air into traditional Mexican fare, Chef Alex Stupak’s Empellon empire is in full blossom in New York City. With rumors swirling of some three new restaurant openings and a cookbook on the way, the WD-50 alum will only be adding to the current list of successful properties under his umbrella- namely the West Village’s Empellon Taqueria and the East Village’s Empellon Cocina, to where we ducked in for dinner on a recent weeknight. Focusing more on elaborate and innovative ingredients rather than a multitude of different tacos, Empellon Cocina has established itself as one of the neighborhood’s most sought after dining locales and a preponderance of mezcals and tequilas that rivals any spot citywide.

A singular black awning camouflages the restaurant on bustling First Avenue. But on a seasonably warm evening, the front doors are open wide and the energetic noise inside is alluring to street traffic welcomed in to find a filled up semi-circle bar surrounded by well dressed clientele- at least by the standards of this area, that is. The dining area is lined by puffy egg shell white booths behind dark wooden tables. The dim lighting only adds to the vibrant atmosphere despite the close proximity to one’s neighbors, much of which is beneficial to eyeball each dish they’ve ordered and hope that yours will be as aesthetically fulfilling.

When the restaurant first opened, a good deal of attention was paid to what was missing from the Empellon menu- namely tacos. Imagine a Mexican inspired restaurant with a dearth of these handheld creations. Pleasantly tacos now find their place at the Cocina, albeit with their Chef’s own inspired twist. The innovative menu offers up distinctive salsa and guacamole options and is relatively diminutive in that the selections are broken down between ‘Hot,’ ‘Cold,’ and ‘Tacos.’ But Stupak and company have clearly sacrificed quantity for quality as almost every dish delivered to our table was exceptionally tasty.

With a fresh bowl of “Masa Chips,” we dipped into the “Bacon Guacamole” ($10) immediately. Topped visibly with slices of salty bacon, the guacamole was deliciously chilled although the flavor of the cured meat could not be tasted immediately. The side of black pepper salsa accompanying the guacamole was a welcomed addition for each crunchy chip. Meanwhile, the “Red Snapper Ceviche” ($15) was absolutely delectable. Served cold amid a bed of extra virgin oil and sliced avocado, each bite of fresh fish was flavorful and rich, meshing hints of saffron in delicately. The “Lamb Tartare” ($13) was similarly delicious, served crimson red and flat on a bright white plate. Shredded avocado leaf and meshed guaje seeds proved perfect compliments for seasoning the tasty raw lamb meat- our first every foray into this style.

Somehow even though the ‘Cold’ portion of the menu was excellent, what was to follow managed to exceed our previously ordered dishes. The evening’s “Bone Marrow” ($15) brought us three hearty helpings of rich and creamy marrow topped with greens and fiery red pepper slices to be enveloped by warm flour tortillas. The portion size was ideal for sharing as we scooped the inside of each bone (pardon the pun) literally down to the bone, and made for the highlight of our entire dinner. Tacos also made a much welcomed appearance with appetizer portions of two bulbous tacos decorating each plate, piled high with savory meats. Of the two ordered- the “Carnitas” ($14) and the “Shortrib Pastrami” ($18)- choosing a favorite proved difficult as the “Carnitas” featured hunks of salted pulled pork topped with a tangy salsa verde marmalade while the “Shortrib Pastrami” was draped in a mustard seed salsa atop pickled cabbage. The juicy pork, suffice it to say, was the winner for this palate, but you can’t really go wrong with either option.

There’s truly no dearth of Mexican style or inspired cuisine in and around New York City. From old world traditional styles to infusions mixing a variety of culinary cultures, Mexican fare is as commonplace as dollar slices of pizza or a certain green-colored coffee spot. But Empellon Cocina is no run of the mill Mexican restaurant as everything from the atmosphere to the attentive waitstaff to the brilliantly prepared and inspired fare will demonstrate. With successful haunts in both the East and West Villages, only time will tell where Chef Stupak will attempt to place his next flag. But one thing is for certain, based on our dining experiences at Empellon Cocina, we’ll be among the first in line to pull up a chair.