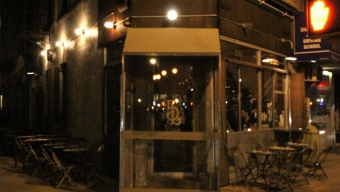 Conceptually, the bistro style restaurant that would open as Five Leaves was the brainchild of actor Heath ledger, whose tragic passing long before his time would not allow him to see his idea come to fruition. Unique in shape and distinctive in menu, the restaurant itself deserves far greater praise than a simple celebrity spawned idea might imply. Open for breakfast and lunch, the café style atmosphere here exudes a quaint neighborhood joint, while the excellent cocktail program (The bourbon infused “General Lee” was outstanding – $11)and dimly lit dinner scene make finding Five Leaves a true hidden gem inside of a borough literally resplendent with them.

Residing across the street from uber casual and equally as distinctive sister bar Nights and Weekends, the restaurant has a certain rustic feel to its corner exterior. But the interior doorway opens to a lively dinner crowd surrounded by off-white barn wood, and the kind of old world small shop vibe that you’d expect to stumble upon in a much more rural setting. Even the bar itself, backed by several rows of bottles, feels like you’re sitting in casual comfort inside someone’s home. Due to the dining area’s diminutive space and shape, tables are pushed closely to your neighbors, but surprisingly in this setting it only enhances the experience of dining here, and doesn’t detract from the fare being served.

We quickly slurped up a half dozen oysters from the raw bar (“New Brunswick,” “Beausoleil” – $15), freshly shucked and served with a drizzled tangy rice wine mignonette, before perusing the remainder of the menu. With a concert later in the evening, we were tasked with keeping dinner relatively light and were thus forced to pass on items like the “Devils on Horseback” ($7) or bacon wrapped dates, the “House Made Ricotta” ($11), and heartier fare like the “Five Leaves Burger” ($15), served Aussie style with a pineapple ring, beets, and an egg atop a tender meat patty. The menu in its entirety is considered American Noveau fare, but it also has a certain farm-to-table style, with its variety of healthy options to choose from.

When dining out, we typically avoid chicken dishes because- hey, we can make chicken. But Five Leaves proved differently with an absolutely mouthwatering order of their “Grilled Giannone Chicken” ($22). Served with the crackles of its salty seasoned skin, each bite was deliciously juicy, surrounded by black kale leaves, black trumpet mushrooms, roasted chestnuts, and (gulp) white pudding. The combination of savory ingredients worked wonderfully, only enhanced by our side order of “Sweet & Spicy Brussels Sprouts,” a steal at just $6, paired with watercress and pecans. Although we kept the ordering to a minimum, the meal’s conclusion found us completely satiated.

Whether you trek out to Five Leaves for breakfast or dinner or whether you make a reservation because it was originally Heath Ledger’s restaurant idea, is immaterial. The point is that you go at all. While Greenpoint is not necessarily a neighborhood regarded for its noteworthy restaurants, Five Leaves manages to combine casual dining with truly appetizing fare. And by perfecting such an elementary notion, the restaurant has become quite good at surprising even the most skeptical of diners.