The Marrow: A LocalBozo.com Restaurant Review 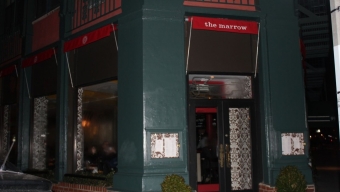 The Marrow
99 Bank Street near Greenwich Street, West Village
212-428-6000
Getting There: L to Eighth Avenue; A,C,E to 14th Street
http://www.themarrownyc.com

With a name like The Marrow, it’s not unreasonable to expect to enter a restaurant of grand extravagance, one that acts as a massive shrine to all things meat. Instead, the newly opened relatively concealed West Village bistro is a sleek, almost loungy restaurant that eclectically meshes equal parts Italian and German inspired styles uniquely. Creatively spawned from former Top Chef contestant Harold Dieterle (Kin Shop, Perilla) and partner Alicia Nosenzo, the amalgam of distinguished styles somehow comes together cohesively inside of the comfortable if not diminutive space. And just like it’s name suggests, you really won’t know how delicious something truly is until you get inside and taste it for yourself.

The layout of The Marrow is almost as eye catching as its bevy of distinctive menu items. Three bright red half-circled booths sit back to back behind the host stand at the restaurant’s entrance, shadowing the vibrant bar area, where inventive cocktails like “The Marrow 75” ($12) and the delicious “Bank Robber” ($12) are effortlessly mixed and poured. From the bar, the walls are lined with some loud wallpaper and shelved knick-knacks, adding bits of conversation starters to the short wait time to be seated. The main dining area features alternating views of the quiet streetside and a small rectangular glimpse into the not-entirely-open kitchen, but really, most of the meal is spent watching what other diners around you are eating.

Although the entire menu is a singular page, there’s actually a great deal of decision making to be made which all depends on your level of dining experimentation. From “Foie Gras Mousse” ($8) and “Braised Rabbit Leg” ($15) to the “Sauteed Stone Bass ‘Vitello Tonato’” ($30) topped with sweetbreads and of course, “The Bone Marrow” ($16), The Marrow certainly offers up the opportunity to taste something different. The “Prosciutto Wrapped Dates” ($7) were an especially collaborative dish, enveloping the sweet oval fruit with rich, creamy gorgonzola cheese chunks, and when wrapped by the salty cured meat into large bites, became perhaps our favorite sampling of our meal. Less than stellar however was shaped selections of “Baccala Gnudi” ($14), which despite the subtle addition of rosemary and pine nuts, had the slimy consistency of gefilte fish, which not even the surrounding broth could salvage.

Unfortunately, the blandness continued to the main courses as the “Juniper-Braised Lamb Neck ($23), while nostalgic for its ‘home-cooked’ flavor, resembled more a pot roast than a classic chef prepared entree. The pungent red sauerkraut and whole roasted carrots and the bed of rutabaga puree made for delectable accoutrements, but the entirety of the dish seemed to miss its mark overall. Pleasantly however, the “Pan-Fried Duck Schnitzel” ($28) more than made up for the dinner’s previous shortcomings. The generous crispy cutlet was downright excellent, perfectly prepared with fresh breadcrumbs and over modest helpings of dry spaetzele, hazelnuts, and a chilled cucumber-potato salad. The warm, salty texture of each bite exploded with flavor; the first time that we can ever recall enjoying duck prepared this way.

Although The Marrow opened toward the very end of 2012, the buzz is already citywide. The fare is innovative and in some cases, downright outstanding. While the newly opened space certainly needs to work through some of the kinks in their menu, it’s infinitely clear that ownership knows how to build toward an opening and subsequently build a following. But to keep up with the rapidly changing tastes of a city that is perpetually fickle The Marrow needs to work on its consistency across the board before we return for a follow up visit- even if the “Dates” were really, really exceptional.