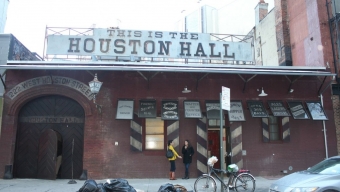 On the final weekend of a huge Northeastern cold snap the “Drink Here Now” crew was down in the West Village to drink in the day in only the way we know how. This imbibing trip would take us inside one of the city’s newest and most exciting bier gardens. It is true that during the winter months drinking outside is pretty much nonexistent. But one gigantic, brilliantly designed space in the Village is taking the party inside to give us jaded city folks something to be excited about. Enter “Houston Hall” a bier garden located in the former space once used to house illegal immigrants. But on this Saturday it was the ultimate melting pot of cultures, personalities and brews!

As you approach Houston Hall, its exterior signage and door will tantalize you before you even walk inside. The huge sign and pillars are only the first example of the meticulous architecture that went into re-designing this space. A huge red barn like door welcomes guests with it’s mysteriously oversized appeal. Once inside, we traveled down a small hallway which leads into what we would call one of the most insanely cool spaces in town. It was early in the afternoon and as such, plenty of seating was available at the first come, first served tables, which wouldn’t last for long. We quickly grabbed up seats and began to drink in the place even before the first beer was ordered. The mostly wooden and tiled space appears to retain much of it’s former residence’s charm- a naturally lit, industrial type feel.  One can easily tell that they added a huge layer of faux-historic pictures, knick knacks and paintings to really make you feel like you’re drinking in a world frozen by time.

But before we could get too deep into treating this place like a museum, our waitress came by to take our order. And even though the hall was starting to fill up, she took the time to go through the rather large menu with us. For beers we opted for the tasty “Patrick’s Belgian Blonde” and “Peter’s Pils” varieties in medium sizes running us both 8 dollars. The beers arrived quickly in classic German stein glasses. With lunch time approaching, we decided to order some hearty snacks off their highly eclectic menu. We went for the “Hurricane Wings” ($9.50), “Meat Board” ($17.50) and “Beef, Kimchi, and Smoked Bacon Potstickers” ($8). The menu is far more expansive than a traditional beer hall might suggest, and each of these options certainly hit the spot for us. Houston Hall appears to have a real love for food truck inspired food, making it a true friend to the current New York City eat-on-the-go scene.

As the day worse on, the hall got more packed changing the vibe from relaxed to more of a party, which we were clearly all for. But during this time some chaos did occur. As we were getting into our third beer each the computer system went down which led to a bit of confusion and disconnect between the wait staff and the bar. But after a short while the internet returned and all was well. Trust us brew fans, this is a place you want to hit often and early in the day. Grab your marathon drinking buddies and mark your territory at one of their huge tables for a saucy afternoon you won’t soon forget.

When to Visit – Saturday in the afternoon is hands down the time you need to be at Houston Hall. Arrive with a gang of friends and take over one of their huge wooden tables and spend hours drinking the day away.

Value – Each medium sized beer will run you roughly 8 bucks and the food prices are on par with the rest of the neighborhood. You won’t find cheap brews like PBR or one dollar hot dogs here, but it is the overall vibe of this indoor bier garden that you will truly value.

The Lowdown – Even through the computers went down on our first visit causing some chaos, Houston Hall is one of the finest new bier gardens to come along in quite some time. The place is huge enough for you to spread out and enjoy beers and grub with your friends with also enough shared space for you to meet some strangers and make some new ones.