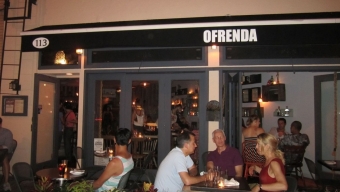 Sophisticated without a hint of pretension. Authentic Mexican fare without the option of an old fashioned taco. A neighborhood gem amongst a sea of likeminded standouts. The Spanish translation for Ofrenda is a gift, and the restaurant itself is perhaps best described as the West Village’s friendly offering to dining New Yorkers seeking Latin cuisine. Mixing a cool lounge and bar atmosphere with a casual cantina vibe, the traditional Mexican dishes being served marry together the ideologies behind both concepts.

The white block letters laid over the all black awning stand out vibrantly above the outdoor tables which seat patio diners on this mild evening. The parade of foot traffic and honking taxicabs bustling nearby don’t seem to interrupt the clinging of margarita glasses nor the dinner conversation outside Ofrenda’s cozy dining space. The sound inside however is at an energetic frenzy. The length of the bar is crowded as each high top chair is filled by thirsty patrons awaiting the fast moving bartenders to whip up their latest cocktail concoction. The dining space meanwhile is similarly packed, with the wait staff scurrying between tables and around standing drinkers with bowls of fresh “Guacamole Traditional” ($11) and “Queso Fundido al Horno” ($11).

The menu is not necessarily expansive, which we certainly welcome at such an inspired Mexican style eatery- it’s difficult enough making and sticking with our choices. It’s broken down into three separate sections- “Para La Mesa” (for the table), “La Cena” (dinner), and “Los Extras” (side dishes)- each of which seem to run the gamut from meat to poultry to seafood. Offerings like the “Empanadas” ($10) and the “Quesadilla Abiertea de Huitlacoche” ($12) sit beside peel and eat shrimps and striped bass ceviche. The “Pollo en Manchamanteles” ($19) was a deliciously sweet take on mole sauce, doused in thick brown drizzle, rich with flavors over a bed of perfectly prepared rice. The “Pescado Sarandeado” ($24) was similarly excellent- the striped bass cooked and glazed delicately over a tomato radish salad.

While you’re more likely to have heard of haunts like Mercadito and Diablo Royale, Ofrenda eschews the tex mex style, Americanized infusion that many generic restaurants of the same ilk seem to embrace. Instead, the small eatery transports you to a cooler, authentic feeling atmosphere, aligned with the modern sexiness of Mexican culture and style. There is perhaps no better feeling than sitting barside at Ofrenda and slugging down tequila like an old pro. That is, until you have to deal with the following morning.