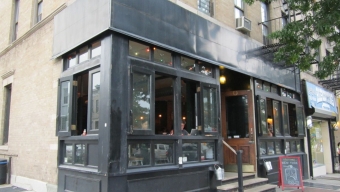 The ever changing New York City social culture of today demands that bars, especially new ones step up their games to stand out. The days of swill beer from dirty taps and fried poppers are for the most part over. The increasingly popular craft beer and local foods movement has worked toward ceasing these tired trends, while giving back to the consumer ten fold. On the corner of an old school street in Windsor Terrace, just a stone’s throw from the more well known Park Slope resides “The Double Windsor,” a forward thinking beer lovers paradise, now celebrating it’s third prosperous year in business.

When I say “old school” street, I’m not just whistling through the graveyard here. (Coincidentally, there is a famous graveyard just a few blocks away) The Double Windsor is surrounded by a handful of bars in the area that are clinging onto the old way of doing things; Let’s just say they are polar opposites. But step inside Double Windsor any day of the week and you will find a warm and friendly place to hang out and grab that combination of brews and food. The first thing you should do is grab a seat at the wooden horseshoe shaped bar. There may be a bunch of stools, but trust us they fill up quickly. The overall shape of the bar places guests directly next to and facing each other across the way, making the joint feel close knit. As stated, wood is used throughout the bar quite liberally. From its wall panels to the tables on the floor, you really feel like you’re in a place that has been here for decades, not just a few years. The customer first approach extends to monthly trivia nights as well as beer tasting functions occurring often throughout the year.

Yes beer lovers, “The Double Windsor” is your home to some of the most popular and sought after draft brews in all of Brooklyn and Manhattan. Even before you walk through the front door, the “Good Beer Seal” sticker placed proudly on the window reveals as much. If the season is right you’ll have your choice of two superb Pumpkin Ales. The first of which is the popular “Southampton Pumpkin Ale” (16 oz. $6), a traditional version of this fall brew presenting highly drinkable flavors of the beloved gourd paired with hints of nutmeg. If you’d like to challenge yourself a little why not grab a “Flying Dog The Fear Imperial Pumpkin Ale Nitro” (12 oz. $6). This is the brew pictured in the gallery above. From it you can easily tell that it is way darker than your typical Pumpkin beer. The taste matches the appearance exactly, making it a brew your going to want to sip on for awhile. Both of these beers will go for a dollar off during Double Windsor’s weekly Happy Hour special. Not a fan of craft brews? That’s perfectly fine. The bar has a selection of canned choices humorously named, “Fizzy Lifting Drinks” featuring the likes of Miller High Life and Yuengling Lager for just three bucks a pop. The bar’s impressive craft menu changes all the time so be sure to consult the highly knowledgeable and friendly bartender about your particular taste. Beer flights are also available to try a little bit of everything as well.

If food is what you crave look no further than the place’s large chalk drawn menu placed on the back wall listing a loaded variety of good eats. Orders are placed by walking to the back of the house and paying in cash. It’s a good time to also mention everything- booze included- is cash only. The food menu reads like a comfort foodies letter to Santa. Love “Mac & Cheese?” Well, this ain’t the box kind by a long shot. The bar prepares a homemade combination of cheddar and fontina cheeses ($8) and can also be topped with Nueske bacon for an additional two dollars. Need some accompanying meat? No problem; just grab a “Creekstone Farms Beef Burger served on Amy’s Bread bun” ($12). The humanely raised beef puts this burger at the top of their must eat list as well. What’s not to love about a bar located right outside a nearby subway station loaded with choice brews and eats but without a drop of pretension. That’s why, regardless of the day you decide to visit, “The Double Windsor” is a bar you must drink at now.

When to Visit – Seven days a week you will find this place busy. If possible try to arrive shortly after they open to grab a coveted seat at the bar or nearby tables.

Value – Their loaded selection of craft beer goes on Happy Hour during the week as soon as they open at 3pm. Treat yourself to dollar off brews. If you’re not feeling like a micro ale grab a “Fizzy Lifting” drink like a $3 can of Miller High Life.

The Lowdown – The Double Windsor just celebrated it’s third year in business, and with a recognized, impressive beer selection, innovative and local conscience food menu, they are easily giving surrounding bars a run for their money. The classic neighborhood is mostly loaded with old school local type haunts, but Windsor Terrace easily comes out head and shoulders above them in overall likability tests. It also doesn’t hurt to be able to grab a super dark Pumpkin Ale and a can of the cheap stuff all at the same joint! Just be sure to bring a bunch of cash, because this place doesn’t accept plastic. so put away that pesky Discover card, hit the ATM, and kick back with some affordable suds.