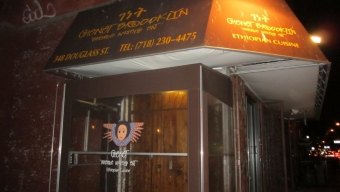 Since you were a child you were told that eating with your hands is wrong and for the most part of your life after that, taboo. Yet for one culture in particular it is not only customary but the way of the road to consume meals using all five digits. This manner of dinning derives from the Ethiopian people, a culture that has existed since the biblical era. My fellow diner and I wanted to make a Saturday night out to eat more interesting and thought this type of fare would be right up our alley. Enter “Ghenet Brooklyn,” a cozy corner restaurant that has been serving this handheld goodness for years to a neighborhood that loves to experiment with how they eat.

Ghenet has been listed time and time again as having the best Ethiopian food in all of Brooklyn by major food outlets. We were therefore slightly hesitant to just do a walk in on a Saturday night. Fortunately for us, a table for two was easily accessible with only a short wait and just as the friendly host had promised, it was only a few moments later when our party was taken to the dining room. The space seemed to be near a hundred percent capacity that night, set up with a handful of medium sized tables that line the perimeter of the room. The walls of this modest, yet warm area are covered with an ornate iron wall paper of sorts to transport diners back toward the Middle East. One of the best features of Ghenet is the huge window display that faces the hustle and bustle of the ever growing Fourth Avenue, Gowanus neighborhood.

The server much like the host was both friendly and prompt. On this evening our party wanted to sample solely authentic Ethiopian fare. Without blinking, he suggested bottles of “Hakim Stout,” a true blue Ethiopian brew. As a fan of craft beers from all locals, we were thrilled to sip on something with unique character. The stout had a defined honey taste which mixed in with its carbonation and was unlike any stout I’ve ever tasted. The aftertaste left a strong coffee flavor that was also somewhat bitter but considering we had two each in order to get the full flavor profile, we had no real issues with its drinkability.

Choosing our main dish really wasn’t all that difficult as we instead chose to allow our server make the selections on our behalf. He instantly suggested the “Ghenet Combination for 2″ ($33.95), a gigantic platter serving a choice of two meats and two vegetarian sides. We opted for the “Doro Wett,” a seasoned chicken served in a flavorful sauce, and the “Sega Wett,” containing morsels of beef served prepared with a blend of spices. The veggie sides were “Misir Wett,” which are lentils cooked slowly in a flavorful berbere sauce with a blend of spices, and finally “Gomen Wett,” a collard green dish cooked with a laundry list of tempting spices. The chicken was served on the bone- juicy, but quite spicy. The savory beef pairing brilliantly cut the heat giving us an almost pot roast taste sensation. The salty greens and creamy lentils were prime for mixing with the meats and using the Injera (traditional Ethiopian bread) to pick it all up and pop into ones mouth. The Injera has just enough flavor to be good on it’s own, but it’s true purpose is to mop up every last bit of goodness.

Whoever said playing with your food is wrong hasn’t been to Ghenet. First time customers will get a kick out of the novelty of using your fingers as forks and spoons. But as soon as you take your first bite the joking will end and the savoring will begin.