Getting to Know The Bronx Brewery: A LocalBozo.com Spotlight 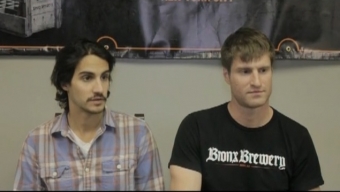 Sitting down in the Bronx Brewery headquarters with partnersâ€™ Chris Gallant and Damian Brown, the level of excitement with regard to their rapidly growing brand is palpable- like getting in on the ground floor of the next local beer to make it big. Today, two of the Breweryâ€™s four partners are in the office- working, strategizing, and even hand-brewing some of the fine Bronx Pale Ale, the Breweryâ€™s flagship, and currently only available beer. From the collective minds of an experienced team- from master brewing, to a former employee of Heineken, to the marketing side- the Bronx Brewery team seemingly has all bases covered, as they strive to become the newest beer brand emerging from a crowded New York City borough. And if their first beer’s exceptional taste is any indication, only bigger and brighter lies ahead for this talented team of entrepreneurs.

Since commercial production of the Bronx Pale Ale began in August 2011, the team has staked a claim at food and beer tasting events all around Manhattan- from aPORKalypse to The Beer, Bourbon, and BBQ Festival, to the Beer Nâ€™ Balls Festival just last week. Add that to a growing number of beer bars in and around Manhattan, and the silver and black tap handle seems to be popping up everywhere lately. Based upon the teamâ€™s hard work, the brandâ€™s recent prevalence is no coincidence.

The American-style Pale Ale has a deeply rich amber color to it, delivering an enjoyably bitter taste. Utilizing five different barley malts and a unique strain of yeast, the Bronx Pale Ale is specially crafted in small batches with premium ingredients yielding a taste that is both full of flavor and somehow, in a crowd of craft beers, actually unique. With a citrusy aroma, the beer drinks relatively light, eschewing that overwhelming â€˜craft beerâ€™ profile that fills you up after a small sip. As a matter of fact, the Bronx Pale Ale pairs exceptionally with heavy, meatier foods from that perfectly cooked steak to a spicier blend of chili.

Sipping a perfect pour of Bronx Pale Ale from an ice cold glass, the team is equally excited about the emergence of the beer as they are about giving back to the Bronx. From their substantial green initiatives to sourcing and growing local ingredients, both Gallant and Brown stressed the importance the borough has played in their lives and how the Bronx will be a focal point of their business strategy going forward. In fact, the small crew will soon return to the fundraising stage to take the next step toward their brand emergence- building an actual brewery in the borough. (Currently, they are forced to utilize space in Connecticut) The partners have also made assurances that a small portion of their profits from each beer brewed will be given back to the Bronx.

Although the Bronx Brewery continues to gain more acceptance throughout the City by drinkers and as it continues to become more and more available at different bars, the partners know that they have much work left to do. The Pale Ale has become a strength for the group and theyâ€™ve promised that their follow-up beer will likely be another, albeit different style of pale ale- a â€˜sweetspotâ€™ for the brand, as they called it. But the team has no plans of abandoning their efforts of controlling their entire business model from brewing to distribution. And with a locally sourced and produced beer thatâ€™s infinitely drinkable, the sky certainly seems like the limit for the team behind New Yorkâ€™s newest great beer producers. The Bronx Breweryâ€™s â€˜Bronx Pale Aleâ€™ belongs on a short list of your must try beers.

LocalBozo.com was fortunate to sit down with the increasingly busy Damian Brown and Chris Gallant, two of the four partners behind the Bronx Brewery at their Mott Haven headquarters. Watch our exclusive video as we learn more about how they are creating expertly made brews while simultaneously breaking down the conventions of beer distribution and giving a new life to the Bronx. This is â€˜Getting to Know The Bronx Brewery: A LocalBozo.com Spotlight.

For more information on The Bronx Brewery including where you can find the Bronx Pale Ale in a bar near you as well as upcoming events and so much more, check out thebronxbrewery.com.