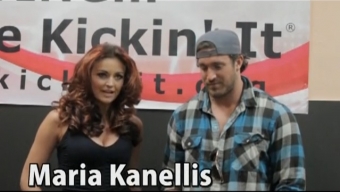 The history of professional wrestling in New York City dates back multiple decades. From the small smoke filled halls to the old Madison Square Garden to next yearâ€™s big show at New Jerseyâ€™s MetLife Stadium, wrestling in the northeast has long been an entertainment staple of its inhabitants. On a smaller scale, the independent Manhattan based Family Wrestling Entertainment is keeping the tradition alive by promoting PG oriented shows featuring some of the biggest names in the industry. Late in February, the group teamed with New Jersey non-profit organization â€œWeâ€™re Kickinâ€™ Itâ€ to bring attention to and help eradicate bullying, utilizing a roster of some of the most recognizable names working on the independent circuit.

The FWEâ€™s â€œNo Limitsâ€ event was set up inside of â€œThe Hall at St. Paul,â€ intimately staged in a spacious church auditorium on 59th Street, giving fans the opportunity to sit incredibly close to all of the action. The card was filled with familiar names, formerly of the WWE and TNA ranks- Tommy Dreamer, Tara, Maria Kanellis, Jay Lethal, Charlie Haas, Winter, Miss Tessmacher, Big Daddy V, to name a few, would be performing on this night. But at its core, the show itself played as a background to highlight the importance of preventing bullying before it starts.

Readers of LocalBozo.com will recall our piece from October, from the Weâ€™re Kickinâ€™ It benefit at the Hard Rock CafÃ©, featuring the likes of Ultimate Fighter Dan Severn, and former wrestlers Rocky Johnson, and Mick Foley. It was there that our awareness of the detriments of bullying became magnified, and in speaking with the actual children that are forced to deal with the verbal, physical, and now cyber bullying on an ongoing basis, the adverse effects of bullying today are far superior than the oneâ€™s any of us faced even ten years ago. Some of the statistics around bullying are simply startling- an estimated 77% of students are somehow mentally, verbally, & physically bullied- thatâ€™s 3 out of every 4 students in a given school- and worse, 1 in 10 children have had embarrassing or damaging pictures taken of themselves without their permission, irrevocably exploiting them. Weâ€™re Kickinâ€™ It is to be commended for being a true resource for these youngsters with nowhere left to turn, and acts as a support group of sorts for the voiceless, with a strength in numbers approach.

Partnering with the FWE was another way to distribute their message of anti-bullying, and attendees were treated to an outstanding night of in ring action. Lesser known wrestlers on the independent scene like Malta the Damager, The Midnight Sensations, and Mr. Pec-Tacular Jesse Godderz (a recent signee of TNA) utilized the show as a coming out party to showcase their skills in front of a rowdy, but well behaved crowd. The evening would stage a four person womenâ€™s tournament to crown the first ever FWE Womenâ€™s Champion, won by former WWE Diva and current First Lady of Ring of Honor, Maria Kanellis and would be highlighted by Charlie Haas battling â€œThe Innovator of Violenceâ€ Tommy Dreamer in the main event.

LocalBozo.com was fortunate to sit down with some of the eventâ€™s biggest stars backstage to discuss what itâ€™s like for them to work right here in New York City and how they can utilize their celebrity to put an end to bullying for good. Listen in as Tommy Dreamer, Jay Lethal, Maria Kanellis, Mr. Pec-Tacular, Malta the Damager, â€œThe Prodigyâ€ Mike Bennett, and The Midnight Sensations speak candidly with LocalBozo.com, and check out some of their exciting in ring footage to boot. We’ve got two exciting videos- the first of which focuses on We’re Kickin’ It’s anti-bullying message and the other highlights some of the FWE action and the wrestlers’ love of working in New York City. The next big FWE show comes to Manhattan on March 24th at 3 Legged Dog Studios, and with Billy Gunn and Brian Kendrick already added to a stacked roster, this is a live show not to be missed. For more information on the good folks at Weâ€™re Kickinâ€™ It including how you can make a donation and what upcoming events theyâ€™ve got planned in the area, check out werekickinit.org. And to see whatâ€™s coming next in the FWE, check out fwewrestling.com.

Blog: FWE â€œNo Limitsâ€ at The Hall at St. Paul