Comedian Amy Schumer Sits Down at Carolines with LocalBozo.com 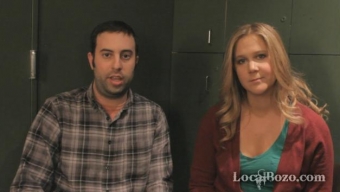 The life and career trajectory of a stand up comedian is unlike any job out there in the modern world. Taking on an audience one on one, equipped solely with a microphone and the goal of making you laugh, is one of the most difficult and gutsy crafts of entertainment to undertake. With the intimidation of working on stage alone, vetting out material that doesn’t work from the jokes that do, and potentially having to deal with unruly crowds in less than stellar cities, there is frankly, no other job like it. For years and years, the last names of legendary stand-up comics have been transformed from meager beginnings as support acts on small stages in Podunk, Iowa, into headlining large clubs and entering the public lexicon through substantial sitcom and film work. Every few years, a new crop of comedians all seem to emerge at once, and for the very first time, it appears the new class are all women.

Leading the charge, Amy Schumer is one such rising star. The New York native has been cultivating an act that is gaining popularity by its vulgar, unapologetic, and most important self deprecating approach to the stand up routine. With her unrelenting quick wit and ability to shock audiences, 2011 was a banner year for the young comic. In April, Schumer released her first stand up album titled, “Cutting” to stellar reviews before taking her seat at the dais and subsequently, stealing the show at the Comedy Central Roast of Charlie Sheen in September. Schumer’s breakout performance was the highlight of the evening, holding her own with the likes of Mike Tyson, William Shatner, the late Patrice O’Neal, Seth Macfarlane, and Sheen himself. Following in the footsteps of fellow comedienne Lisa Lampanelli at a Comedy Central Roast before her, Schumer’s short set took no prisoners, left the crowd in awe, and was handsomely rewarded with positive press, and with that, a slew of new career opportunities.

On the heels of performing a four night stand at New York’s historic Caroline’s on Broadway as the headlining act, LocalBozo.com was fortunate enough to sit down with Amy Schumer backstage before her set. As soon as she walked through the dressing room door, her acerbic wit was on display. All of this before our camera was even rolling. Our interview with Schumer was obviously funny, but it also revealed some serious insight to the woman herself. The topics we touched on ranged from coming up as a new comic in NYC, dealing with hecklers, following in the footsteps of other female comics, all the way to her current successes and future projects and plans for 2012 and beyond.

After wrapping the interview, we took our seats in the famed room at Caroline’s to see Amy Schumer go to work. This would be the first night of four and the place was completely packed to the gills with admiring fans. Schumer took the stage to the applause and cheers of a crowd who knew exactly who she was, and craved her brash humor where there would be no line uncrossed. The forty-five minute set was overstuffed with prepared material that killed, as well as “crowd work” that showed Schumer’s lazer like precision to trash an audience member in a way that everyone could find something to laugh about, even her target. Amy Schumer’s star is on the rise because she is in control of her career, making decisions that reflect who she is and wants to be. But above all don’t fuck with her, unless you want to get run over.

For more information about Amy Schumer including where you can catch her next on tour, be sure to check out AmySchumer.com and follow her on Twitter @amyschumer.