A LocalBozo.com Restaurant Review: The Harrison 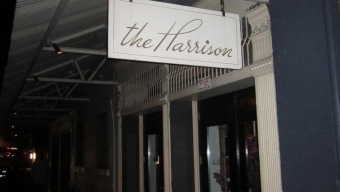 The Harrison
335 Greenwich Street at Harrison Street, Tribeca, (212) 274-9310
Getting There: 1 to Franklin Street
http://www.theharrison.com

Tribeca is a neighborhood with no shortage of chic restaurants, whether partially staked by a certain celebrity actor, or otherwise. Spawning in 2001, The Harrison is a place that perfectly fits the neighborhood, serving American fare without being pretentious. Unlike some of its neighbors, the space is well lit, encouraging glances around the room at both the plates on other tables and at the caliber of people sitting down for dinner inside.

Just through the front doors, The Harrison places fresh bouquets of floral arrangements, a nice touch before greeting the friendly hostesses. Inside the space is not grandiose- it comfortably sits about 84, with a lengthy bar area for table waiting, or for a more casual meal- as many patrons were enjoying on this night. But the energy inside the restaurant is palable and the lively, “happy to be there” crowd makes you appreciate the restaurant’s ambiance that much more.

Where the wine and beer selection is diverse, but as a result of the neighborhood, sits on the pricey side, the menu is not as extensive. But while the menu might be diminutive, The Harrison certainly gets points for being inventive. Dishes like the “chips and chicken liver dip” ($8), served with potato chips and the “sauteed sweetbreads” ($12) with scallion and toasted hazelnuts, highlight the eclectic starters menu. The standout for us was the “roasted quail” ($14), a small but impeccably tender poultry in a Portuguese sauce with a creamy almond spread. The savory meat literally fell off the bone into our waiting mouths.

The entrée options were similarly enticing- from the bold (“sautéed calf’s liver” $23, in a sherry vinegar) to the basic (“skillet roasted chicken” $24, served with zesty lemon and garlic over a potato puree). The “creekstone hanger steak” ($30) with pancetta and a balsamic reduction and the “braised pork shank” ($24) served over a bed of cannellini beans were two beautiful looking dishes with tremendous presentation on the plate. But ultimately, we opted for some lighter fare. The “potato wrapped trout” ($24) was a fantastic filet enveloped in tastes of almond and light mustard. The “sauteed skate milanese” ($22) was also an excellent crispy filet, served alongside pickled mushrooms and arugula. The entrees were complimented by an outstanding side of “truffled orzo” ($9). Contrary to popular belief, the side dish was not heavy but fluffy, with a deliciously salty, creamy composition, of which we devoured every single ounce. The two fish entrees were deliciously flavorful, and coupled with the light starchy side, we were left satisfied but not overly stuffed.

The Harrison brings Tribeca yet another restaurant with a modern atmosphere inside to match the style and class of the neighborhood. The energy from the surrounding streets resonates with the patrons inside and even rubs off on the sparkling waitstaff, hustling around to please the hungry, well-dressed eaters. And if the vigor of the neighborhood and the restaurant itself aren’t enough, the food is pretty damn good too.