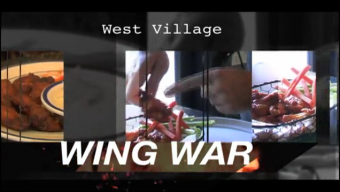 The Upper West Side proved to us here at LocalBozo.com, that New York City knows how to make some damn good hot wings. If you recall, we chose three of the most highly acclaimed wing joints in the neighborhood. Each of the joints- Blondies Sports, George Keeley’s, and lastly The Gin Mill, served us some excellent wings. They each had different characteristics that made them stand out, but only one of these popular sports bars could reign supreme. The wings at Blondies were victorious in a close contest of supremacy.

The time has come to dust off our appetites and prepare for a new battle. The location may have changed but the mission remains the same: finding out just who serves the best wings in New York City. And this time, the only way to victory is to have a good old-fashioned Wing War! Battleground- the West Village!

Many people will tell you that variety is the spice of life, and most of the time they are correct. That is why for our second wing challenge, we chose spots in the city that weren’t traditional sports bars. The West Village is a perfect place for this, since they feature such a diverse collection of neighborhood bars. Since we have already been through one Wing Off already, our judgment and pallets would be sharper this time around.

Once again, it was important to lay out some fundamental rules to ensure a similar wing eating experience from bar to bar. The wing style would strictly be of the buffalo variety. The only sauce that may be used to dip wings is bleu cheese (Who the hell uses ranch anyway? That’s just amateur hour if you ask me.) The heat of the wing does not matter- if you want to tear up and hiccup, it’s your call.

Before we officially head into battle, it is my distinct pleasure to announce the fierce combatants in the West Village Wing War! First, from the street known as Bleecker, this popular pub serves up some of the most sought after microbrews in all of New York City. They have been featured in countless articles about their suds, but this establishment has also garnered a large following for their hot wings. Our first Wing Warrior is the “Blind Tiger Ale House.”

The Blind Tiger Ale House has a true gastro-pub type feel to it. You can drink excellent, awarding winning micro and cask beers while chowing down on some excellent eats. But on this day we were here for one purpose: the wings. Blind Tiger’s wings are served in one style, so the decision was made for us. The generous portion was brought to our table quickly after we ordered them.

Upon first inspection, these did not appear to be the typical hot wings that we had been accustomed to. The bartender explained to us that these wings were in fact baked, and not fried. Intrigued, we quickly dug into the first wing, dipped in a liberal amount of bleu cheese sauce. We could instantly taste the difference with these baked wings as the skin was soft, yet very flavorful with a delightful saltiness. All of the wings were uniform, with an attractive golden look to them. The bleu cheese was traditional with huge chunks that were actually blue, a very rare thing indeed.

The baked wings paired well with the hoppy and blonde style ales that appear on Blind Tiger’s extensive beer menu. We were able to leave Blind Tiger Ale House without feeling overly stuffed, but satisfied. This was obviously an important factor to us outside of the framework of the contest, since we had two more wing stops to hit in the neighborhood.

A bit down Bleecker Street, in the thick of NYU-Country lies a bar with the sole purpose of feeding you and showing you a good time. Thunder Jackson’s Urban Roadhouse has been in the neighborhood for about three years and they have already garnered a great reputation, having been featured in several blogs for their famed “Dirty Burger.” When it comes to imbibing spirits, they have it down to a tee. Thunder Jackson’s serves 40oz in a paper bag to take you back to your underage high school days. For the hardcore, they also have Das Boot, a large glass boot filled with the beer of your choice. You can share it with your friends, or power it by yourself!

The Dirty Burger and those amazing drinks would be the LocalBozo crew’s main attraction on any other day. But today, the mission was the Hot Wings. Upon entering the establishment we quickly checked out the menu but the server insisted we try the “Pissed Wings”- a Buffalo style hybrid with Thunder Jackson’s special combination of spices. But if you thought the wings were fiery, you haven’t seen the bartenders yet.

With high grade alcohol in one hand and a lighter in the other, these brave drink-slingers jumped up on the side of the bar, and prepped to give us the best pre-wing show possible. After loading their mouths with the hooch, they lit their torches and spit the booze into the air, causing a fireball bigger than your head. In a word, it was cool. More watering holes in this city need to bring back these types of theatrics as they heighten the bar going experience.

After a few pints and the brief show, the “Pissed Wings” arrived. The presentation was in a basket, with cups of bleu cheese and celery sticks. Upon first inspection, that glaze of the wings stood out right away, as well as red pepper flakes which were in abundance. We could stare at the wings all day, but it is the taste that matters in the Wing War. The first bite brought out a distinct tangy sweetness, but behind it came some much needed heat. The “Pissed Wings” fit into that category of a Yin and Yang food, where you get the best of both worlds. The heat from the “Pissed Wings” built at a slow pace. The first couple of wings displayed some heat but the sweetness was more prevalent. But as we progressed deeper into the basket the burn increased, yielding more bleu cheese dipping to put out the fire. The skin of the chicken retained most of the heat. Beneath the sauce coated skin, the chicken tasted almost exactly like rotisserie style. Our beer choice was the “King” of beers as its light and very cold flavor helped put out the fire, without losing any of the “Pissed Wing” flavor. Move over wine and cheese, we want our “Pissed Wings” and beer!

The final battle ground for the Wing War is an out of state home for everything Philadelphia. Wogies (Pronounced: WHOA GEES) sits on a rather peaceful block of Manhattan’s West Village. The bar’s Philadelphia theme extends to both the food they serve and the sports they play on their flat screens. Any time of the year Philly ex-pats can pony up to the bar, enjoy a cheesesteak, and take in some sports in familiar surroundings.

The funny thing is that cheesesteaks are not necessarily Wogie’s signature item. In fact, the hot wings are the most popular item on their menu. Since it was a sunny day we sat outside of Wogies at their sidewalk tables. The bar has a great variety of wing flavors but the LocalBozo crew ordered the traditional hot wings. In keeping with the Philly bar theme, Yuengling pints were our beer of choice.

Not too long after we finished our beers, the wings arrived. We all know that first impressions are important but when these wings came to the table we knew we were in for something special. Before indulging in the all important first wing, we were blown away by the vibrant color of the sauce and skin that covered the chicken that we would soon be diving into. These wings were also huge, dwarfing the ones we had earlier that day. The presentation was like something out of a magazine advertisement for wings, maybe even akin to a centerfold. Yes, I just compared hot wings to a nudie magazine- that’s how good these looked.

The first bite instantly brought out two distant flavors- spicy red pepper and butter. The butter flavor was not subtle in the slightest; it was bold and mouth-watering throughout each bite. It also provided a delightful contrast to the red peppers which were not used sparingly at all. It must be said that the wing sections were our favorite, as they retained the most sauce. The skins were also perfectly cooked. They had just the right snap with each bite without coming off as dry. The generous bleu cheese was delicious and refreshing as well. For a Philly bar, these guys sure know their hot wings!

THE RESULTS ARE IN!

We were pleasantly surprised by the tasty wings at all three outstanding neighborhood bars, but in battle there can only be one victor. As a recap, we enjoyed Blind Tiger Ale House’s baked wings. We could really taste the chicken’s saltiness and they weren’t overly heavy. Thunder Jackson’s “Pissed Wings” brought the heat in a big way and paired incredibly well with a great sweet and sticky sauce for a wild flavor balance. Finally, Wogie’s wings had a savory buttery flavor. Those Philly guys aren’t afraid to use the often maligned condiment and that’s a good thing.

The final battle has been fought. The bleu cheese bombs have exploded with hot sauce running through the streets. Out of the darkness and the fog of war, one army marches to victory. The Wogies Army! The boys from The City of Brotherly Love have spread some of that to New York’s West Village in a major way. The sheer size and consistent flavor of these hot wings could not be matched. That is why we present to Wogies, the official LocalBozo.com “Purple Heart of Wing War.” Congratulations! The LocalBozo Crew would like to extend a hearty thank you to all of the participating bars for the West Village Wing War. They all deserve your patronage.

You can check out more of LocalBozo.com’s “Best Buffalo Wings in NYC Series” below:

- Best Buffalo Wings in NYC: The Upper West Side Wing Off