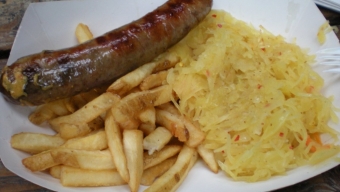 The Williamsburg section of Brooklyn is well known as New York’s Hipster Mecca. Every street in the neighborhood is filled with either a scenester bar or a place to purchase an overpriced vintage shirt of a wolf howling at the moon. Once you look past this you will find that Williamsburg is the home to some truly amazing establishments for eating and drinking.

In 2007 the Radegast Hall & Biergarten officially opened its doors. No longer would one have to trek out to Astoria, Queens to fulfill the German beer drinking experience. The first aspect of the place that one notices is the architecture. The owners have painstakingly recreated a true German Bierhaus. The exterior of the building has been altered to look like a worn hall from yesteryear.

Once inside, patrons will see a dimly lit yet cozy bar space. The walls are covered with old German signage and paintings, while the bar itself has an oval oblong look to it. This helps to provide a large amount of seating options. But the space is only the beginning. When one travels out of either two large doors they will enter into the large hall space.

The Beer Hall (pronounced Bierhaus) is a true sight for the eyes. The large space has a high vaulted roof with skylights that open during the warmer months. Either way, the amount of daylight that shines through truly makes you feel that you are outside. Several long wooden tables fill the floor of the space providing plenty of room for small and big parties. They also are great for making new friends since you will be sitting next to complete strangers.

Aesthetics aside, you are really here for two things: drinking beer and chowing down on some pretty delectable foods that go perfect with German ales. The beer list is loaded with only the best from Deutchland, be it a Radenberger Pilsner (pictured) or something from the Gaffel Brewery- they have you covered.

For 13 dollars you can have a full Liter of one of these tasty brews. It’s really a great feeling to hold up one of these large glass mugs and toast the people around you. It made me feel like a Viking- true story. When you drink beers here, you will want something hearty to eat and it’s a good thing that in the rear of the hall sits a massive grill.

The main attraction here is the German style sausage. You can have a traditional bratwurst, or let your wild side out and have a deer venison Sausage. Either choice is a good one. When ordering these tubed meats you get a side of spiced sauerkraut and fries. I decided to go with a bratwurst as it is an old favorite of mine. At the grill you are presented with a variety of mustards. I recommend you taste all of them and experience hugely different flavors. The bratwurst itself was cooked to perfection. The first bite proved this in a major way as the skin snapped to its juicy center. I swear to you, I could have eaten these all day: they are simply that good.

The Radegast Hall & Biergarten, is a true taste of Germany in Brooklyn. It is a multi-service venue where a group of people can imbibe large beers while humming along to the German Om pah music blaring out out of the speakers. The hall is also the home to live music, and in most cases there aren’t covers. If you have a free day over the weekend, head down there. The natural daylight coming in from above provides a warm and welcoming place to haunt all year long. Cheers!