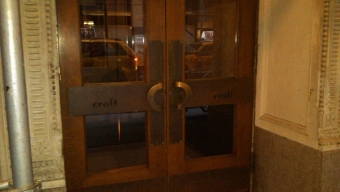 The interior of Craft is non-descript to a degree- the tables are bare- large, wooden, and rectangular.  The ceiling is lined with dozens of illuminated light bulbs, which shine upon the exposed brick walls, for a truly unique dining atmosphere.  And the subtle décor allows you to give your undivided attention to the cuisine, which it fully deserves.

Tasting menu aside, Craft’s dinner selection hosts a plethora of diverse choices- from the first courses featuring raw oysters ($3 ea.) and cured octopus ($18) to table options like the suckling pig ($78), and the 28 day dry-aged porterhouse ($125), which as some have suggested- may be the best in New York City.  What’s interesting about the menu is that all of the entrees are served a la carte much like a steakhouse, so patrons must order some of the tasty side dishes to fully compensate.  Coupled with the fact that the waitstaff will bring out tastings straight from the chef throughout your meal, and you are treated to a genuinely distinct dining experience.

We started our first course with the Wagyu Capaccio ($25), a high grade, thinly sliced, raw beef plate, topped with a cooked hard-boiled egg, and crispy french-fried onions.  The balance of flavors shifted constantly in our mouths- from the savor of the cold serving of beef, to the crunchy and salty onion, to the creaminess of the egg, as each ingredient fought for supremacy, but ultimately brought out the best in each other.

The entrees were just as spectacular in their own right.  The roasted diver scallops ($30) were served pan seared with a side of delectable drawn butter, and although there were only four of them, their bulbous size and perfect cooking allowed them to literally be bursting with juice at every flavorsome bite.  Similarly, the roasted black bass ($28), also served pan seared, was flawlessly prepared and garnished with fresh rosemary was one of the tastiest pieces of fish that we have enjoyed in some time.  Expertly seasoned, the flaky fish was absolutely mouth-watering and smooth going down.

Craft also offers so many different side dishes that choosing one can be daunting.  In fact, we’d actually like to go back again just to taste some of the alternates.  The restaurant offers five different roasted vegetables, three different sautéed vegetables, six different mushroom varieties, and four different potatoes.  Our one recommendation- if you dine at Craft, the gnocchi is an absolute must try.  These are so soft and silky that you can literally flatten them with your tongue and the creamy white sauce surrounding the potatoes compliments them admirably for an exceptionally delicious flavor.  We were less impressed by the sautéed spinach ($9), which was a generous portion, but was ordinary compared to the rest of the evenings meal.

Craft seems to get all of the little things right.  Tremendous food.  Terrific service.  And even an occasional celebrity sighting- LocalBozo managed to get a glimpse of Law & Order SVU’s Christopher Meloni inside.  Leaving the restaurant the hostesses hand out muffins to take home, completing an evening that you will remember as truly special.