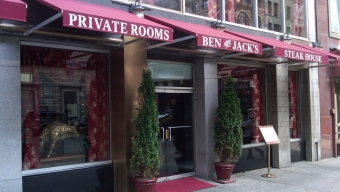 Dining out at a New York City steakhouse is an experience that should be relished and celebrated and when it is all over and everyone’s stomachs are filled to the brim, it should be remembered as an evening that was special.  Some former employees of Peter Luger’s have managed to find their niche by opening a restaurant that provides just that- the aura of something exceptional.

Ben & Jack’s steakhouse is an absolutely outstanding restaurant that delivers on every level of service.  From the friendly and impeccably dressed hosts to the engaging bartenders that welcome guests, each trip to the restaurant makes you feel like you’ve been there before, and that Ben & Jack’s is truly happy to have you back.

Inside, the décor of the restaurant shows a clear focus on tasteful, understated elegance, which is only furthered by performance of the staff.  The waitstaff was more than willing to offer food and wine recommendations and answer any questions; we found them to be as polite as they were attentive.  We began our meal with a few bottles of red wine (Francis Ford Copolla 2007, Pinot Noir, $55) from the Steakhouse’s vast wine list, followed by sizzling, thick strips of Canadian bacon ($2.95 per slice).  The cuts were nicely charred, but were fatty (yes, even for bacon), subtly dulling what would have been an otherwise delicious taste.

Where the bacon may have lacked, the steaks more than overwhelmed.  In fact, it is possible that the words you are reading here simply can not do justice to quite possibly the best steak in Manhattan.  Flawlessly cooked with a crispy, charred, and seasoned exterior and a perfectly seared soft pink medium rare center, even Peter Luger himself would be impressed.  That’s right, Ben & Jack’s dry aged Porterhouse really is that mouth watering.  Paired with savory sides of sautéed spinach ($9.95), tasty steamed asparagus ($11.95), and our favorite, a German potato ($10.95), a crunchy mash up of hash browns, the heaping plates of sides seamlessly complimented the flavor of the “Steak for Three” ($122.85), shared by our party.  Much like other steakhouses, Ben & Jack’s offers the Porterhouse cuts pre-sliced, and in additional party sizes of Two ($81.90) or Four ($163.80).  Other traditional cuts like the Filet Mignon ($39.95), Ribeye ($39.95), and New York Sirloin ($40.95) are also featured on the menu, but we suggest you pass them by and challenge the Porterhouse head on.

Everything about Ben & Jack’s shouts premium- from the tremendous service, to the delicious cuts of steak, to the unassuming classiness of the restaurant’s interior- and while other steakhouses may boast fancier names, the porterhouse at Ben & Jack’s takes a backseat to nobody.  We can only hope that the most recent location on Fifth Avenue does not water down what is one of the finest dining experiences in New York City.