‘Sip For The Sea,’ Another Swimming Success 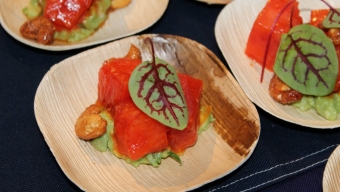 In the fleeting minutes of daylight at New York City’s iconic Central Park Zoo, hundreds of well dressed eventgoers gathered to celebrate one of autumn’s most fun-filled food-centric events.  The Fifth Annual ‘Sip For The Sea’ would bring together some of the city’s finest chefs and restaurants inside of the Park’s legendary space for a festive frenzy of food tasting, wine sipping and animal watching all in the name of a great cause.  The Wildlife Conservation Society’s annual affair would benefit the New York Aquarium, which is undergoing a sizable transformation to unveil a new exhibit dubbed ‘Ocean Wonders: Sharks!.’  The 500,000 gallons of water display will play host to sea turtles, rays, sharks and of course, fish – slated to open in 2018.

Until then though, there was plenty to get excited about inside of the Zoo itself.  Following an interactive demonstration courtesy of some of the most adorable looking sea lions you’ll ever see, guests were encouraged to parade around the space for glimpses at monkeys, penguins and birds, all of which were more than happy to soak up the attention of awed onlookers.  Meanwhile, as the music of The Blue Vipers of Brooklyn filled the open air in the background, talented culinary masters and their staffs were putting the finishing touches on their expertly crafted dishes, somehow cooked to completion right on site.

We’ve extolled the virtues of Luke’s Lobster over and over again on these very pages.  But there’s quite simply a reason that their model has allowed new locations to successfully pop up all over town – and it’s the same reason that their lines typically tend to be the lengthiest at similar food-focused events.  The food is downright excellent.  Their ‘Maine-Style Lobster Roll’ was absolutely mouthwatering, lathered in some lemon butter and mayonnaise and doused in Luke’s ‘secret seasoning’  You would be hard pressed to find a more delicious sandwich – with tasty hunks of fresh lobster meat spilling out from the perfectly soft split-top bun.  Not to be outdone, Seamore’s ‘’Big Red’ Poke’ was similarly flavorful, replete with chunks of fresh watermelon surrounding a sole piece of soft and delicious tuna.  The candied cashews gave a touch of textural contrast to the dish, with a sweet crunch breaking up the creamy avocado and harissa medley.

We continued to pace between tables, marveling at the likes of Esca’s ‘Crudo del Mercato’ and Shuka’s sesame seed-laden ‘Yellow Fin Tuna’ dishes, before quickly devouring each of them.  Fittingly, the evening paired each tasty dish with a different sustainable wine offered by Bonterra, where the likes of their ‘Viognier,’ ‘Rose’ and ‘Pinot Noir’ really set the stage for our palates to allow the food and drink to dance in kind.  We slurped some ‘Whitestone Oysters’ from Bowery Meat Company, crushed on some ‘Brioche Crusted Crab Cakes’ courtesy of The Tuck Room and indulged in some ‘Taramasalata,’ a smoked trout roe with potato in a pita shell from Amali before waving the white flag on any further delicacies.  Okay, one more half ‘Lobster Roll’ from Burger & Lobster and a few handpicked ‘Pumpkin-Spiced Donuts’ from Doughnut Plant and THEN we were all finished up for the evening.

With food events of this caliber, it’s really easy to get wrapped up in the festivities of the evening.  But amid such an incredibly unique setting, as the sea lions in the Central Park Zoo looked on, we were fully aware of the impact that our donations would be making.  And with that in mind, at ‘Sip For The Sea,’ the savory foods and delicious pours of wines each tasted that much better.