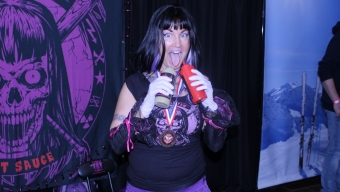 You can dip chips in it, baste chicken with it, kick up a seafood dish with it or sip it straight from the bottle. Whatever your fancy, the end of April marked the return of The Fifth Annual NYC Hot Sauce ExpoÂ to the spacious and festive Brooklyn Expo. Bringing together dozens of local and distant purveyors of all things sauce, thousands of local New Yorkers would pony up the minimal $10 entry fee to taste some of the most distinctive and unique man-made concoctions available anywhere. And the spice was effectively kicked up to fiery levels.

Though some rain would drizzle throughout an otherwise warm weather Saturday afternoon session- one in which the incredibly valued VIP Tickets were gobbled up by truly devoted sauceheads- the weather was no detriment to folks gathering in the outdoor space, where an array of different food options was being served for purchase. Inside meanwhile was a truly raucous affair, perhaps the most well-attended Expo in the brief history of the event. Before parading around the sprawling area to taste each sauce for ourselves, we made sure to take in some of the sights and sounds from the â€˜Spicy Bagel of DOOM Challengeâ€™ and the â€˜Chicken Wing Challenge,â€™ both of which unsurprisingly resulted in a bevy of grown man tears and a group of folks slugging down cartons of cold white milk.

But aside from posing at different photo booths and watching the interactive competitions, guests spent most of the afternoon chatting with the mom-and-pop style hot sauce makers, each of whom is using a signature style to make sure their brand sticks out amongst the four dozen or so in attendance. There was Tahiti Joe, decked out in a straw hat and Caribbean attire, doling out samples of dueling sauces dubbed â€˜Dump Trumpâ€™ and â€˜Make America Hot Againâ€™ to tap into current events. There was â€˜The Kingâ€™ of BBQ,’ dressed in a full Elvis jumpsuit, pouring spoonfuls of thick red sauce to the masses. There was even goth-queen â€˜Purple Pam,â€™ in full regalia, serving up some Toxic Avenger related hot sauce called â€˜Toxieâ€™s Elixirâ€™ to the horror loving public.

Among our favorites from the weekend, we really dug New Jerseyâ€™s Whitehouse Station, a small outfit thatâ€™s become a staple in our pantry. With a line of six hot sauces, the â€œPeach Habaneroâ€ was an immediate favorite. Subtle and sweet, spicy without being overwhelming â€“ man, was this an especially tasty offering. Equally as delicious, Angry Goat Pepper Companyâ€™s â€œYellow Flamingo Hot Sauceâ€ yielded a citrus and banana mixture amid some medium heat, allowing the flavors held therein to really stand out on each crunchy corn chip- our eating apparatus of choice. Sure- the usual suspects were once again front and center like the team from Culleyâ€™s, who may have created the finest wing sauce in recent memory with their buttery â€œHot Buffalo Wing Sauce.â€ But for our money, it was the small, lesser-known producers that really left us satisfied â€“ and grasping for cups of water.

Then of course we attempted to â€˜Face the Furyâ€™ with the “Cobra Chilli Hot Sauce” â€“ a tremendous mistake. Iâ€™m fairly certain we saw a gentleman taste the sauce and then quickly lose his eyebrows on account of the incredible heat. As tears streamed from our eyes, and beer was guzzled into our bellies, there was no stopping this onslaught of fire. We faced the fury â€“ and lost in spectacular fashion. It would be a few more hours before food began to taste normal again. Of course, we jest here â€“ but the sauce was immensely spicy and is recommended only for the fearless. For us though, weâ€™ll stick to the medium temperature sauces with inventive ingredients and unique flavors. Â We’d be remiss if we failed to mention the likes ofÂ High River Sauces, Burns & McCoy, Torchbearer SaucesÂ and the team fromÂ Puckerbutt Pepper Company for delivering some of the day’s finest samples.

The hundreds in attendance during Saturdayâ€™s session undoubtedly left satiated after receiving such a great value on an event that never tried to price gouge its visitors. Kudos to the organizers of the event once again for hosting an affordable afternoon, with reasonably priced drinks and cocktails that left a scorching trail behind for those brave enough to partake in the truly hottest sauces of the day. And a memorable afternoon of watching these brave folks be tamed by tiny spoonfuls of sauce, for the rest of us.