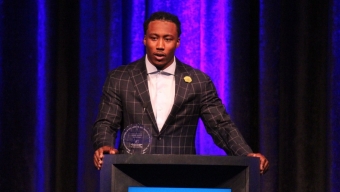 Since 1904, Big Brothers Big Sisters of New York City has worked to forge lasting one-to-one relationships between volunteers and underprivileged youths, giving them the opportunity to be mentored, supported and empowered as they mature. With more than 500,000 children living at our below the poverty level in New York City alone, the necessity for community outreach is real. Getting involved is important. And fundraising to serve the organizationâ€™s initiatives is essential. Enter Thursday evening, where the New York HiltonÂ in Midtown would roll out the red carpet for the 38th Annual Sidewalks of New York benefit, an evening that would eventually raise more than $2 million during the course of the single night affair alone.

The picturesque ballroom was a change of pace from the currently under renovation Waldorf-Astoria, but the hundreds of well-dressed attendees barely noticed a difference, hobnobbing during cocktail hour with the likes of NFL Commissioner Roger Goodell, who makes a point to attend each and every Sidewalks dinner. Returning to emcee the 2017 affair was award winning journalist and Emmy Award winner Soledad Oâ€™Brien, who reprised her role as the eveningâ€™s incredible orator, perfectly pacing the program of speeches, video packages and award presentations. While the utterly fantastic â€˜Chicken Pot Pieâ€™ and the decadent â€˜Ice Cream Sundaeâ€™ were memorable parts of the evening, it was the speeches of Bigs and Littles that left a lasting impression on all in attendance.

Following some welcoming remarks from BBBS Chief Executive Officer Hector Batista, pairs of Bigs and Littles would introduce Dinner Chair John E. Waldron (Goldman Sachs), BBBS President Marva Smalls, and the eveningâ€™s award winners, New York Giants receiver Brandon Marshall (Sports Award) and Brendan Dougher, Managing Partner of PriceWaterhouseCoopers, accepting the Corporate Award on his companyâ€™s behalf. Unsurprisingly, Marshallâ€™s address was particularly compelling given his path from overcoming a spat of legal issues and mental health struggles (Marshall was diagnosed with Borderline Personality Disorder in 2011â€™) to become one of the most feared and successful pass catchers in the NFL. His story of overcoming adversity to reach unparalleled levels of athletic success was both inspiring and relatable, especially given that many of the kids enlisted in BBBS of NYC are likely facing some challenging obstacles of their own.

The eveningâ€™s Text-to-Pledge campaign proved to be particularly popular with the audience as guests could easily donate funds directly to the organization from their very seat with the results projected on a big screen for all to see. The spectacle of it all made the larger donations all the more dramatic as each $1,000 donation yielded a massive response around the beautiful ballroom. Despite the more than 5,000 children being served each year by Big Brothers Big Sisters of New York City in each of the five boroughs, thereâ€™s still more to do and more to be done. The charisma of the Littles given the opportunity to address the room showcased a collection of bright, funny and hard-working young boys and girls looking solely for the chance to shine. With the help of some deep-pocketed attendees, selfless volunteers and companies willing to offer their resources, Big Brothers Big Sisters of New York City continues to work tirelessly with these children to offer them that very chance.

For more information on the groupâ€™s mission, to make a donation or to get involved, check out bigsnyc.org.