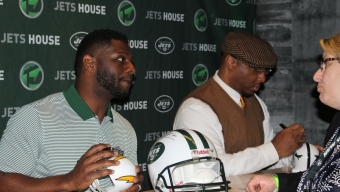 Frequent readers of the pages of this website will undoubtedly recognize the lengths to which the players of the New York Jets will go in order to connect with their fans. Every year, the weekend before the Super Bowl marks the return of Jets House, a weekend long interactive experience that allows Jets legends, current players and future greats to schmooze with local folks that bleed green. Last weekend, the particularly fun affair would take over Flatiron ping-pong hotspot SPiN for four sessions earmarked by friendly competitiveness and autograph hunting.

Each of the weekend’s sessions would welcome an array of different players into the athletic space for several hours to indulge in some eating and drinking, pose for pictures and take their turn with a paddle on opposing sides of the diminutive tables. The entire SPiN venue had been transformed into a sea of green, evident within the first few steps into the space as we arrived for our Sunday afternoon session. Two beautiful members of the New York Jets Flight Crew cheerleading squad welcomed our arrival, happily posing for photos alongside our team and arriving guests. While the day’s largest line was to meet and greet the likes of legendary Jets players (and more recent Hall of Fame inductee) LaDainian Tomlinson and Mo Lewis, posing in front of the team’s only Super Bowl trophy was a very cool opportunity for long-suffering fans. Super Bowl III was certainly a long time ago!

Attendees noshed on brunch fare like deliciously deep-fried “French Toast Sticks,” mouthwatering “Pork Belly” and “Egg Biscuit Sliders” as they stood in quickly moving lines in anticipation of meeting the likes of Chad Pennington, Quincy Enunwa and Robby Anderson, who to their credit, could not have been more gracious with their time. Distracting as it was to see bright orange ping pong balls bouncing all around the room, the guests inside were certainly enjoying themselves amid the family friendly atmosphere. A live DJ playing music throughout the day certainly added to the party ambiance and festivities inside the room during the fourth annual affair.

Time will tell if the New York Jets can somehow get over the hump and once again hoist the championship trophy overhead, something that just a few years ago seemed to be so very close. But until the team has the opportunity to be practicing for the big game in the week before the Super Bowl, fans will just have to settle for Jets House, among the most fun (and reasonably priced) ways to bring the team closer to their diehard fans. And with seemingly a new venue being utilized each year, the team finds new ways to make the January rite of passage a new and special experience for longtime football fanatics.