Taste of East Village: Downtown Dining For a Cause 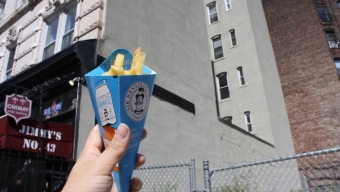 San Gennaro may have been the more grandiose street festival this past weekend, but it certainly wasn’t the only one. On Saturday afternoon the Cooper Square Committee, an organization that helps the East Village community with affordable housing and cultural spaces, hosted their first ever Taste of East Village. The event, organizers hoped, would bring awareness to and raise money for their latest project: The Bea Arthur Residence, a transitional facility for LGBTQ youths. Ticket sales from the day’s event were to go to finishing this home.

September lends itself to prime festival weather, as it’s sunny with clear skies, but not hot enough that our vegan “Matcha Ice Cream Cones” from Van Leeuwen Artisan Ice Cream would melt. Hosted between Cooper Square and 2nd Avenue on East 7th Sreet, there’s an odd mix of long-standing locals and curious NYU students. Unsurprisingly, the two biggest lines form around Luke’s Lobster and Veselka. Luke’s Lobster was feeling good, as their staff recently won back the ‘Lobster Rumble’ title from the Clam Shack, and their “Lobster Roll” was, as always, a clean, bright, and delicious bite to start the day. We would go back for seconds, later. Veselka meanwhile was offering helpings of their famous “Pierogies” and “Bratwurst.” The only complaint here was that each taste only included one pierogi. We’re suckers for anything stuffed with cheese and potato.

Even though each ticket to the taste event included what organizers billed as “4 tastes,” taste was a conservative statement. Most places, like Insomnia Cookies, Jimmy’s No. 43, Local 92 and Porsena were offering full plates of cookies, hummus platters and pasta, respectively. Needless to say, there were a lot of breaks taken during the afternoon. While local band Bill Popp and the Tapes kicked things off on the entertainment stage, we managed to get our hands on some “Red Velvet” from Butter Lane Cupcakes- certainly eaten out of order, but decadent and sweet nonetheless.

Now, if you’re familiar with the East Village, you know that these blocks aren’t particularly long, but there are a ton of brownstones that line the streets, which make perfect pit stops for people watching and digesting. Our weather apps (those lying things) promised us a mild day in the high 70s, but by 2 PM we were sweating buckets. This was the perfect opportunity to hit up Liquiteria’s booth, where they were offering up their signature “All Greens Juice” replete with kale, celery and cucumber. The boost left us feeling a little more hydrated and slightly healthier.

Naturally, the next place that called to us was the Sir Kensington’s food truck. The vibrantly blue truck was parked at the entrance of the festival, teasing all passersby with the smell of hot “French Fries.” To pair with each serving, there was no mayo, but Fabanaise. Sir Kensington’s was the first company to jump on the vegan mayo trend, using the chickpea liquid in lieu of eggs. Surprisingly, the taste difference was negligible; the texture was somehow even silkier. We were sold. To round out the afternoon, we snagged some “Chicken Nuggets” from the Nugget Spot and a deliciously juicy “Pork Sandwich” from Porcetta. We then promptly ran out of taste tickets, and room in our bellies.

We walked off our “charitable” afternoon all the way home over the Brooklyn Bridge- and dinner wasn’t even a thought that evening.