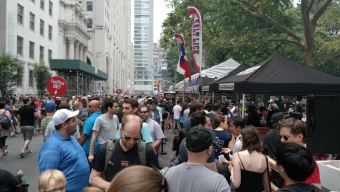 The weather held out all weekend long for the highly anticipatedÂ 14th Annual Big Apple Barbecue Block Party, hosted by the Madison Square Park Conservancy and the kings of charcoal, Kingsford.Â Thousands of New Yorkers lined the smoke-filled streets unabashedly gnawing on ribs, carrying trays stacked with various meats and mingling with pit masters from around the country. Armed with empty stomachs and some SPF, we were inspired to battle by the ceremonial rack-of-ribs cutting just before 11am, our first introduction to the big personalities and big flavors that would occupy Madison Square ParkÂ on Saturday and Sunday.

The event is set up so that anyone can get in line to enjoy some barbecue, but is especially enjoyable for those who purchased a $125 Fast Pass. The pass comes with $100 to be used at the ‘cue stands and allowed for some shorter (in theory) lines; it should be noted that some stands were so darn popular that no amount of privilege got you to those delicious meats much quicker. That being said, we didnâ€™t have a bad bite all day, and learned to strategically purchase plates to bring back to the VIP lawn to be devoured. VIP ticketholders meanwhile, purchased a pass for $275 that afforded them access to a private lawn and an open bar for both themselves and a guest, on top of the Fast Pass benefits. Titoâ€™s, Jim Beam and Knob Creek were pouring refreshing summer cocktails, and Zico coconut water provided some necessary hydration. Earlier in the day, we were treated to a grill-your-own Bloody Mary bar hosted by Kingsford, served up in Yeti mug that kept it cool while we enjoyed “Brisket Eggs Benedict” among other brunch bites. Not the lightest way to start the day, but certainly not the worst.

Back out on the streets, there were plenty of pigs being trucked around (through the crowd, via forklift), and plenty more roasting along Madison Avenue. Ed Mitchell (Ed Mitchellâ€™s Q at the Creek, Raleigh, NC) was hard at work pulling his whole hogs off the smokers at the southern end of the group while Sam Jones and his team from Skylight Inn/Sam Jones BBQ represented North Carolina at the north side of the street. We had our first meal here, a pulled and chopped “Pork Sandwich” with simple cole slaw, served with either an Eastern Carolina vinegar-based sauce or the Carolina Barbecue Sauce from Heinz, developed with the help of Sam Jones. This is the first time we had ever tasted a pulled pork sandwich that had bits of smoked, crispy skin chopped in, and frankly, no other sandwich that we’ve tasted in recent memory can compare.

Our clothes were especially smoky after spending time chatting with the team. This included Chopper who manned (surprise) the chopping post all weekend, Holt, who let us get a closer peek at the pigs, and Uncle Jeff, who proudly shared that he was the one responsible for getting the pig skin in our sandwiches just right (I managed not to hug him, but I thought about it). Meanwhile, Sam Jones did the dirty work of splitting the next dayâ€™s pigs himself, loading them on to the barbecues with the help of some NYPD officers who had become friends with the crew over the years. While we could have spent all day hanging out, there was work to be done elsewhere.

Also on Madison Ave, Bakerâ€™s Ribs (Joe Duncan, Dallas, TX) served “St. Louis Style Ribs” next to 17th Street BBQâ€™sÂ “Baby Back Ribs” (Mike and Amy Mills, Murphysboro, IL), presenting a difficult choice to those having to wait it out in the long lines (there were no real losers, though). Memphis Barbecue Co. (John Wheeler, South Haven, MS) was located across the park on 27th, and served up some crowd favorite “Smoky and Sweet Baby Back Ribs.” Not to be ignored, our city was appropriately represented by a fair share of pit masters more than holding their own. We arrived too late on Saturday for Blue Smokeâ€™s “Crawfish Boil,” a change-up compared to the other terrestrial meats, but they had a long line waiting on their “Alabama White Wings” (Jean-Paul Bourgeois). Brooklynâ€™s Hometown Bar-B-Que was a crowd favorite, unsurprisingly if you saw their plates of “Beef Short Ribs” served with pickles, onion and toast that pit master Billy Durney was slicing up (and you can â€“ he is the one miming a giant bite of ribs our photo gallery).

Offering a sweet respite from the smoked meats and sun, New York City’s Milk Bar was posted in a slightly quieter booth within the park. Closer to the action, the sponsorâ€™s circle had its own share of sweets. For the health-conscious among the crowd (or more likely, for those trying to eat at every single booth), giant cold watermelon slices and fresh peaches were available from Baldor Foods. For those really going for it, Sugareeâ€™s (Mississippi) was selling some of the most giant slices of cake we have ever seen outside a diner. If youâ€™re the generous type, or more likely stuffed to the gills with barbequed meats, there was plenty for sharing.

The last bit of room in our stomachs was taken up by savory “Beef Brisket and Sausage” from Salt Lick BBQ out of Driftwood, Texas (Scott Roberts). The smoke ring on the brisket was substantial, but did not totally overpower the meat. It was served up with a link of smoky, peppery sausage and a choice of classic or spicy barbecue sauce. We obviously got both, but preferred the hotter sauce with the brisket. Word on the street was that Hutchins BBQ (McKinney, Texas) served up some serious brisket themselves, but we had hit our limit on meats before getting to sample some.

Along with the entertainment of pigs being hauled, meats being chopped, and staff recruiting eaters to their tables, a stage at the south side of the park hosted multiple musical acts. We stopped by for Bernie Williams â€“ yes, that Bernie Williams â€“ who played to a crowd that had gathered to hear him and his band despite the hot afternoon sun. The nearby beer garden, one of two located within the park, was packed with thirsty patrons and provided the last part to a great day. Content with our haul, we meandered through the packed park asking patronâ€™s their favorites and were happy to hear that there was no one standout, a testament to the impressive group of pit masters that were assembled.