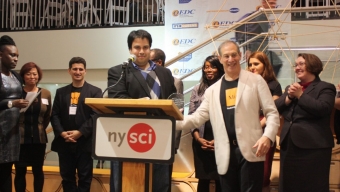 While most folks were prepping plans for their Cinco de Mayo parties, we trekked out to Corona, New York where the New York Hall of Science would host one of spring’s most wildly popular and borough-centric food tasting events. Queens Taste 2016 would welcome more than 700 guests to sample different food and drink offerings from over fifty different purveyors. Once again, proceeds from the evening would be donated to Queens Economic Development Corporation (QEDC), a nonprofit group that works to create area jobs, attract visitors to the borough and increase awareness for Queens related tourism. And with the collection of restaurants participating on Tuesday night, the space was buzzing in anticipation for the vast array of specialties that the borough has to offer. Perhaps QEDC Executive Director Seth Bornstein put it best when he said, “Queens KNOWS food.”

With music throughout the night blasting in the background by The Afro-Latineers, we strategically decided to start off with a drink from Downeast Cider House while we contemplated where to begin. Fortunately, there was food at seemingly every turn. We began at Flushing’s Mulan, where a deliciously succulent “Duck Breast in Sauce” was served just steps away from Uno Pizzeria and Grill, whose “Rattlesnake Pasta” was among the spiciest dishes that we tasted all evening. An array of different styles of cooking and inspirations seemingly alternated from table to table. At Delish NY, we dug into some rich “Truffle Herb Risotto” and “Seared Tune with a Sesame Soy Glaze” before slugging down some of Shake Shack’s “Root Beer Floats.” Astoria’s Sabor de Cuba’s multi-colored “Ham Croquette” was served near Kimchi Smoke’s “Austin Not Cho Mama Chili.”  There was so many different options to go around that the night began to get a bit overwhelming amid the whirlwind of activity.

At this point our selections became a bit more restrictive as we began to reach our fill. In a blur, we quickly devoured “Thai Dumplings” from Rockaway Beach’s’ Thai Rock, “Candied Bacon” from Astoria’s The Astor Room, “Shrimp and Cashew Cabbage Slaw” from The Hilton, the “Burgers” from Woodside’s F.Ottomanelli and “Sliders” from Astoria’s Bareburger. Above the remaining samples that we tasted, perhaps our favorite dish of the night came from Astoria’s Zenon Taverna. The char of the “Grilled Octopus” was a delicious complement to the perfectly cooked purple tentacle, giving us all the reason that we needed to return back to the table for seconds and thirds.

We’d be remiss if we failed to mention the likes of DF Mavens’ dairy free “Dulce de Leche” and 8 Bit Bakeshop’s “Black Canary Brownie,” two deliciously sweet and entirely different takes on dessert. After spending the better part of two hours picking our way around the sprawling space, we were forced to admit defeat and turned our focus to some of the drinks being poured. Samples of gin from Queens Courage and wines from Brooklyn Winery were particularly notable before our foray down what we called “beer alley,” where Brooklyn Brewery, Tsingtao, Blue Moon and many others were offering their products.

While we celebrated food and drink, it was also an evening to celebrate entrepreneurial spirit as the QEDC gave out three awards to companies starting up in Queens. Mr. Bornstein also announced that the ‘Made in Queens’ brand, a favorite among those in the borough, will be having a pop-up shop opening soon. There was so much going on all evening long that tasting everything being offered proved to be a big challenge. In all, the annual Queens Taste was another fantastic night to celebrate the best of Queens, and proved to be a smorgasbord for anyone who traveled to the borough on Tuesday night.