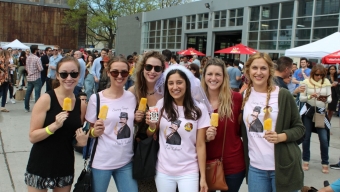 A whirlwind of a weekend whisked hundreds upon hundreds of fire-loving enthusiasts out to Greenpoint, Brooklyn on Saturday and Sunday, from morning to dusk. The highly anticipated function? The return of the NYC Hot Sauce Expo featuring dozens of local purveyors set behind different sampling stations to sell their concoctions to the citizens of New York City. The warm sunshine on Saturday afternoon provided a much needed glimpse into just the kind of weather the month of May has in store for us as the indoor-outdoor setting of Brooklyn Expo once again proved to be perfect for enjoying the jam-packed weekend that was.

Although tame eaters might scoff at consuming an array of sauces made from habanero or ghost peppers, the supply of offerings from the many assembled vendors on hand was so vast that there was plenty of mild styles from which to choose. Ten dollar General Admission tickets granted visitors access to all of the festivities, but the $100 VIP tickets made the afternoon a far more complete experience. The restricted area offered up a cavalcade of unlimited cocktails and mixed drinks from liquor samplings to full pours of beers from Coney Island Brewing Company as well as an array of beef and chicken sliders, Cole slaw and salads courtesy of excellent East Village haunt Jimmy’s No. 43. But even without the special lanyard badges, there was plenty to enjoy at the NYC Hot Sauce Expo when having a smaller budget to work with.

Fortunately each day was loaded with interactive presentations and different eating competitions that ranged from guacamole to wings, pizza to spicy tacos and meatballs to burritos for the hungriest of participants. The elevated stage allowed the sea of guests to get within close proximity to all the action and live vicariously through the many brave entrants partaking in all of the action packed gluttony. As attendees awaited the different contests which would run at the top each hour, short lines would form at each of hot sauce table where vendors from Chicago and Houston, Canada and New Zealand, California and Portland and many from New Jersey and Brooklyn would stand side by side to showcase their different styles of sauces, fun-filled t-shirts and other swag.

Off the bat we visited with some returning favorites where Phoenix, Arizona’s Heartbreaking Dawn’s was back at the NYC Hot Sauce Expo with some of the day’s finest decorated shirts and bottles. The intensely flavorful “Classic Gold Habanero” was a close runner-up to the “Jalapeno Pineapple,” a deliciously sweet and spicy combination best served atop a juicy cut of chicken or beside a tender hunk of pork. The aroma of fresh pineapple here was rivaled only by the “Hawaiian BBQ Artisan Sauce” sampled by Bonfatto’s of State College, Pennsylvania. There’s no question that Nittany Lion supporters are dousing their dishes with pours of Bonfatto’s sauces in their Penn State dorms and this sticky and sweet sauce provided an ample kick with a lip-smackingly sweet finish.  As far as traditional styles go, Culley’s may have come to us all the way from Auckland, New Zealand but the brand may have served up the best pound for pound classic style with their “Mild Buffalo Wing Sauce.” Delightfully tangy, the rich and buttery finish would complement plenty of different proteins but its home atop a crispy deep-fried drumstick would clearly be an ideal pairing. After tongue-tingling bites from Tahiti Joe’s “Smokin’ Kona,” Whitehouse Station’s “Habanero Sauce” and Tamerlaine Farm Animal Sanctuary’s “Casey’s Super Hot Green,” it was time to duck back into the VIP area to load up on pours of Bayou Select Rum cocktails and Stolichnaya Vodka.

With such a selection of different styles on hand, we’d be remiss not to mention the likes of Voodoo Chile Sauces & Salsas (“Winter Angel”), Torchbearer Sauces (“Smokey Horseradish Sauce”), Bocas (recipe from Panama “Hot Sauce”) and Bravado Spice Company (“Jalapeno & Green Apple”), the latter two being memorable enough to bring home with us despite having little to no feeling left on our tongues. Seemingly just as soon as we’d arrived in the early afternoon, the day’s session was over and it was time to get our bearings and leave the spicy-fueled weekend of hot sauce behind us. We indulged in some of the hottest sauces we could bare while admittedly grasped at our throats in horror when biting off more than we could chew. In the end, we gained a new level of admiration for these vendors who dedicate their lives to making some of the spiciest sauces and condiments that even the most adventurous eaters would have a hard time tolerating. These are some folks that are truly great at their chosen craft and we made sure to take full advantage at this year’s NYC Hot Sauce Expo.