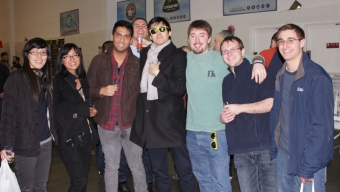 The International Great Beer Expo makes stops each year in Philadelphia and Long Island but traditionally the day before the Super Bowl is reserved for Northern New Jersey. Such was the case on Saturday as the festival of brews once again descended upon the Meadowlands Exposition Center in Secaucus, just 15 minutes outside of New York City. The short bus ride was a quick respite from the bustling Manhattan streets, where the first of two sessions kicked off promptly at 12:30pm and a short line of thirsty beer enthusiasts would extend out from the Expo Center’s main entryway. With a plastic tasting glass in hand, we were off to the races with hundreds upon hundreds of likeminded drinkers with the prospects of some 150 different beers laying ahead of us.

More than seventy different breweries would assemble for the annual event, earmarked by foreign and domestic pours, local purveyors shilling some of their artisanal goods and an array of comfort foods to help build a base for a day of imbibing.Â  Once inside, you’d be hard pressed to find folks not already donning pretzel necklaces, an ideal salt-fueled snack to help stave off some of the heavier beers being poured during this year’s expo.Â  As per usual, we began with a determined search to find fruit-centric beers and Crabbie’s Alcoholic Ginger Beer became among our very first visits.Â  The tangy “Spiced Orange” has been one of the most sought after drinks in our party-going repertoire- especially in summertime- but sipping the refreshing “Scottish Raspberry” was a pleasant new addition to the fold.Â  Definitively sweet, there’s only so much of the bubbly red pour that we’d be able to handle, but as an easy drinking beer, it certainly went down smooth.Â  It was with similar excitement that we guzzled down pours of Schofferhofer’s “Grapefruit” despite its minimal 2.5% alcohol content.Â  Perfectly sweet and exceptionally crisp, this was the standard bearer for fruit spiced beers- bubbly and deliciously tasty.

On the other end of the spectrum were beers that we sampled for the very first time at the expo.Â  Louisiana’s Abita has been bottling their insanely delicious “Purple Haze” for many years, but 2016 marked the first time that we’d taste their “Wrought Iron IPA,” a citrusy, hops-filled explosion of sweetness and caramel.Â  Though pale ale novices might flinch at the idea of a particularly powerful style, this one is sure to satiate avid fans of the variety.Â  In recent years, we’ve also grown quite fond of Brown Ales- especially Brooklyn Brewery‘s fantastic “Brooklyn Brown Ale.”Â  Though Brooklyn was noticeably absent, Boaks Brewing of Pompton Lakes, New Jersey delivered a nice substitute with their “Abbey Brown Ale,” a deep dark pouring beer with a candy-like sip, intensely carbonated with a fairly dry finish.Â  Other beers poured by the likes of Demented Brewing Company, Two Ton Brewing and Beach Haus Brewery were each particular highlights at the 2016 Expo, among a literal sea of flavorful offerings.

Between pours, guests took turns sifting through the array of silent auctions being offered- which ranged from an exclusive in-home dining experience from Rao’s and a night with New York Mets pitcher Matt Harvey- and throwing on a pair of headphones and dancing with other party revelers in the day’s ‘silent disco.’Â  And although food wasn’t included with the reasonably priced $45 ticket, guests also sampled some especially delicious food samples from vendors like Firehouse Donuts, The Jerky Hut and Bonfatto’s Hot Sauce, a staple at the International Great Beer Expo’s recent history.Â  But at the end of the day, the event’s drawing card was its superb selection of craft and micro beers where breweries like Philadelphia’s Yards Brewing Company, 21st Amendment Brewery, Blue Moon (“Cinnamon Horchata” is always a much welcomed sight) and Magic Hat whose “Single Chair Ale” was a pleasant, easy drinking blonde beer that fittingly washed down the sole remaining pretzel on our necklace.

Though the Expo won’t be back in the Manhattan area until next January at the earliest, it’s competitively priced tickets make the trek out to either Philadelphia in June or Long Island in November all the more enticing.Â  For more information on the Expo coming to your area, click it here: GreatBeerExpo.com.
<p style=”text-align: right;”><strong>- Dave Gendelson</strong></p>