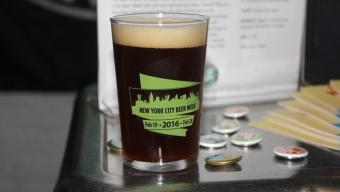 Have you ever slugged down a refreshing craft beer from Bridge and Tunnel Brewery in Bushwick? How about a fine pour from Vermont’s coffee infused Beanery Brewing? With the annual NYC Brewer’s Choice event, lovers of suds from around the five boroughs flocked to Brooklyn’s Sanders Studios on Wednesday night to experience the thrill of sampling dozens of local beers as part of New York City Beer Week- celebration of drunken entrepreneurship. Fortunately there was also a smattering of delicious fare to sample alongside each three ounce pour, as well as bags of Lawless Jerky and Peeled Apple Clusters for attendees to load up on and bring home for later consumption.

Brewmakers large and small convened inside of the rustic and sizable space where local favorites like Other Half and Carton Brewing stood beside Captain Lawrence and Southern Tier to the delight of the hundreds of assembled guests on hand. With pours of SMASH Beer from Big Alice Brewing Company in hand, it was literally off to the races to fill up on tasty local fare. Chef Jacques Gautier of Palo Santo was front and center rolling some fresh flour tortillas and stuffing them with piping hot beef for one of the most savory two-bite “Tacos” that we’ve enjoyed in recent weeks. Served on a newspaper square, the small serving was both authentic and crowd-forming, with a long line of awaiting guests that lasted all evening long.   From the bulbous and juicy “Mini Hot Dogs” at B.B.D.’s to the array of stinky and creamy cheeses and breads at Bobolink Dairy and Bakehouse to a scrumptious bite-sized cracklin’ morsel from Mile End Delicatessen, it was fairly easy to keep one’s mouth moving throughout three and a half action-packed hours.

Fittingly, after fiery tastings courtesy of NYC Hot Sauce Company, we had plenty of options to extinguish the burn. Among the finest beers that we sampled all evening, Brooklyn Brewery’s “Improved Old Fashioned” was downright outstanding. The malt focused barrel-aged rye ale packed nearly 13% AbV into each mouthwatering sip- replete with a touch of orange and nutmeg that allowed the innovative beer to resemble the iconic cocktail. We chatted briefly with Brooklyn’s inventive brewmaster Garrett Oliver before heading in for a chat with Damian Brown of Bronx Brewery. One of the New York area’s most rapidly growing outfits, the Brewery’s specially crafted “Get Rich or Dinkleweizen” was among our favorite of the many Smash styles being served. Brown wouldn’t allow a soul to receive the beer unless each guest recited its name aloud and after two (or ten) attempts, we slugged it down in loud and boisterous fashion.

Other brew houses like Two Roads Brewing (“Worker’s Stomp Saison”), Keg & Lantern (“Gastronomical IPA”), Shmaltz Brewing Company (“Brewers Wanted Pale Ale”) and Threes Brewing (“Superf*ckingyawn”) each delivered some of our other favorites but truth be told- you’d have a hard time not enjoying most of the forty plus beers being poured during NYC Brewer’s Choice. The evening was far from overly crowded, expertly curated and most importantly, was a celebration of local businesses small and large, by some of the most creative mixology minds found in our vicinity.