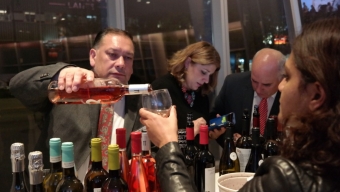 The west side’s beautiful IAC building played host to the 2015 return of Spain’s Great Match, an exhibition of wine, food, and design presented by the Trade Commission of Spain. With live music and a particularly festive mood, the event felt much more weekend than Wednesday. Organized by production region, the bright space displayed over 200 wines, food pairings, and elements of Spanish style to a crowd that was equal part Spaniard (always a good sign) and not, expert and amateur, presenter and participant, but entirely there to have a great time.

Deciding on food first, tastings second, we headed towards Barcelona Wine Bar and Restaurant whose table was visible from the line outside. Their “Esqueixada” was a cool, fresh bowl of Catalan salt cod salad with olives and fresh tomatoes, whose acidity made sense with both the crisp bubbly wines nearby and other younger red wines. In the same section, Andanada served up a “Roasted Butternut Squash with Goat Cheese” that was ready for the fall season that hasn’t quite shown up in New York City just yet. Similarly warming was My Moon’s “Slow Cooked Cxtail,” served in small tin cans with baby rainbow carrots, caramelized pickle peppers, and a sun choke puree. However, it wasn’t until we tried their “Charred Octopus with Najerano Paprika and Potato Foam” that things got spicy hot, at which point we thought it was best to find a cool cocktail. A bartender behind a line-up of bottles at the Jerez-Xérès-Sherry (Sherry to the US) table stood at the ready to show us an updated way to drink one of the world’s oldest wines. Still reflecting the last summer harvests, one of the drinks incorporated fresh berries and their puree, a sweet sip proper for the start or end of any evening.

We next headed towards the live music and the Rioja table, just visible through the group of people already enjoying their selections. The Finca La Emperatriz ‘Cepas Viejas’ Blanco (2012) maintained its drinkability despite the pronounced oakiness that had been added to the versatile Viura grapes. This bottle is a good fit for Chardonnay lovers looking for something similar and without any buttery qualities. Typically used in the region’s blends, the Graciano grape showed it can stand on its own in the 2010 Bodegas La Sorda Graciano. Medium bodied, its red berries were still apparent before a spicy finish came forward. Switching gears, we visited the Castilla-La Mancha region for a red and a white. Going nicely with nearby Casa Mono’s “White Gazpacho” with earthy, spicy homemade blood sausage and lightly tart and sweet green grapes, Verum’s Cosecha 2012 Gewurztraminer and Sauvignon Blanc blend was an expressive, unoaked white. While we were a bit surprised to see the cooler climate grape, the Gewurtzraminer came across as brightly acidic, the wine’s lightly floral green fruits cutting through the richness of the sausage. Also from the region, the Posado Tempranillo offerings displayed the grape’s mild qualities, easily drinkable for its taste and low price point.

We paired Salinas Restaurant and Tapas Bar’s “Aragon-style Braised Lamb with Cardon and Garbanzo Beans” topped with crispy shepperd’s breadcrumbs with Campo Viejo’s Gran Riserva 2009. This tempranillo had a balanced body displaying the familiar red and black fruits, this time with lightly toasted oak and a long finish whose spices echoed those of the dish. Also from Salinas was one of our favorite dishes, a creamy “Goat Milk Rice Pudding” with poached citric apples and an Aragon cheese emulsion, sweet but not overly so. The Gil Family Estates, who distribute wines from all across Spain, poured our favorite affordable wine of the evening, the Bodegas Juan Gil from the Jumilla Region. A blend of reds from old vines, the wine was a people pleaser. With dark fruit and light tannins, it was structured without being short, a wine to be enjoyed on its own or as we had it, paired with Socarrat Paella Bar’s “Carne Paella.”

At the far end of the room, both of Donostia‘s offerings gave a nod to the seaside fare on display this evening. Their “Mussels with White Bean Puree, Piquillo Sauce, Sherry Vinegar and Pimenton” was complex without overpowering the smoked mussel flavor, while their “Damasco con Queso” prominently featured an anchovy atop an apricot filled with fresh cheese and arrope, a grape concentrate. We were not patient enough to wait in the long, long line next door for freshly sliced Iberico ham, though we did admire the precision with which the butcher was shaving see-through thin slices. This was one of many traditional items that were being displayed in addition to the tapas. Elsewhere a selection of olives, olive oils, and cheeses showed off some of Spain’s exports more commonly associated with other countries. After some Manchego cheese, we helped ourselves to a cup of black olives with bright orange marinade, a surprisingly delightful combo.

We ended our night appropriately with dessert and sparkling wine. Barraca’s “Churros” were a far cry from what you see street side in Manhattan; these were half-covered in dark chocolate and filled with traditional Galician cream. Despite being filled and dipped, the churro maintained its signature crisp shell. On the lighter side, we headed back to Andanada to enjoy strawberries with sherry-vinegar alongside a ginger cream foam, which we decided was a good place to stop as its components served as a refreshing palette cleanser – plus we were stuffed and it was next door to the Bubble Lounge. We packed away our tasting notes and enjoyed the last few minutes with a glass of Segura Viudas Cava. Crisp and dry, this was our favorite sparkling wine of the night, an enjoyable choice for those looking for an extremely affordable Prosecco or Champagne alternative, and a great choice for us to toast to an evening well spent.