Suds and Sausage at Edible Oktoberfest 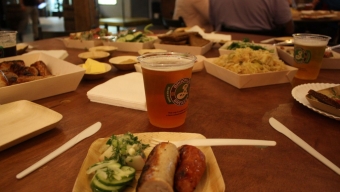 Well it’s official. We are now in October, the first full month of fall- synonymous with pumpkin-flavored everything, football Sundays and cold weather jackets being plucked out from the back of our closets. But with autumn’s return comes one of its most celebrated annual traditions, spawned in Munich, but celebrated around the world. Hosted by Edible Brooklyn, the now yearly “Edible Oktoberfest” returned to Williamsburg’s Brooklyn Brewery on Wednesday night with an authentic feast of German fare and delicious beer to satiate a hungry New York City crowd.

After a brief chat with author and Chef Casey Barber, serving up some savory “Reuben Pierogis” and showcasing her recently released book “Pierogi Love: New Takes on an Old-World Comfort Food,” we grabbed a communal seat at one of the Brewery’s large wooden tables. To prepare the Bavarian-style feast, Chef Emily Petersen of the Astor Center would be tapped to cultivate a traditional menu to pair with the more than ten different styles of beer being poured for the evening. In family style fashion, many of the dishes were laid out on tables for arriving guests to help themselves. Despite the absence of some German oompa music, the sights and smells inside the Brewery space made for a truly festive affair.

The menu selection was both vast and diverse. We were greeted with multiple styles of sausage, chilled cucumber salad, and sauerkraut with apples, each of which quickly made their way to our empty plates as we slugged down pours of “Brooklyn Blast” alongside each bite. Chef Petersen’s rich potato salad was perhaps the evening’s highlight. Candidly, we re-fueled on the mixture of delicious potatoes, cilantro, onions and bacon probably more than we should have, but the finished product was especially tasty as an ideal complement to the array of sausages being served. A selection of mustards surrounded bowls filled with piping hot links of “Weisswurst, Bratwurst, Bockwurst and Bauernwurst.” The salty casings snapped with each passing bite, exploding with savory and mouthwatering flavor.

As we ate the glorious food and got to know our new friends through delightful conversation, we continued to frequent the bar for some of Brooklyn’s finest beers. We had the tried and true options of the “Brooklyn Lager” and the “Brooklyn East IPA” but also found it fitting to try out their “Brooklyn Oktoberfest,” a crisp and refreshing beer that was unbelievably easy drinking given the season. Similarly tasty was the “Brooklyn Defender IPA,” named as the official beer of New York Comic Con, another fall rite of passage in New York City. Closing out a boozy evening, we grabbed a final pour of the subtle and sweet “Post Road Pumpkin Ale” before waiving the white flag on our evening of gorging. We happily lost count of just how many beers were guzzled.

With our bellies so full of salads, beers and sausage, it actually took us awhile to notice that plates of cured rolled ham and pickles were carefully placed all around the brewery as well. The perfect end to our meal was a delicious apple strudel, baked with sweet berries and loaded with a vanilla custard. Though we haven’t booked our airfare to Munich yet, Brooklyn Brewery and Edible Brooklyn once again collaborated on a traditional feast that had us reveling in the October weather rather than dreading the drop in temperatures. Savory sausage and delicious beer leave us in love with fall, and we’re glad that Brooklyn’s finest Brewery does too.