Swimming in Suds at The Village Voice’s ‘Brooklyn Pour’ 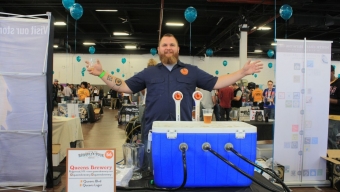 With the recent dip in temperatures, we’ve found ourselves longing for the likes of heavier porters and ales begin to come back into season. Fortunately, Saturday afternoon provided us with the perfect avenue to become reacquainted with some of our old favorites and taste some delicious brand new beers as The Village Voice returned with their seasonal sudsy event, 2015’s “Brooklyn Pour.” If the vast selection of beers wasn’t enough of a draw, the fact that a portion of ticket sales were going to Badass Brooklyn Animal Rescue was definitely an incentive for guests to purchase tickets. Emanating this year from Greenpoint’s Brooklyn Expo Center, we following throngs of flannel-clad beer lovers in forming a jittery line that wrapped around the building’s floor-to-ceiling glass panels.

Once inside, more than 67 different beer vendors lay at our disposal. The brightly lit center provided the perfect set-up for pourers, giving attendees three full rows of casks with plenty of space to mingle, a necessity once the second wave of ticket holders entered the space. To our right, a VIP section held delicious flatbreads from Granddaisy Bakery, the most savory and satisfying “Smoked Lamb Shoulder” from The Gorbals, and easily the most interesting beer on tap from Big Alice Brewing- a “Hi’biskes Goes-Us” that was mildly sweet, but big on floral flavor. This 5th year of “Brooklyn Pour” boasted its first-ever outdoor patio featuring games of giant beer pong- volleyballs in trash cans-, cornhole, and horseshoes that proved to be endlessly entertaining for both participants and observers. Turns out, no matter how big the beer pong set-up is, it never gets any easier. Non VIP-ers were treated to delicious food truck bites from the likes of Nuchas, Papaya King, and Coney Shack and if a meal wasn’t in the cards, soft and salty pretzels from Zum Schneider became a great beer companion.

This being a Brooklyn event, Queens Brewery was the first table that stood out. We would find out this was a big day for them; their “Queens Blvd” beer had just been casked the day before and was ready for tasting. We were the lucky first consumers, ever, and were treated to a full pour of this slightly tangy, delicious ale. Though we would have stuck around for another glass or two, there were over 120 beers to sample. Turns out Queens wasn’t the furthest place brewers were coming from. The likes of Vermont (Otter Creek), Pennsylvania (Victory Brewing), and Texas (Austin Eastciders), were each well represented, though more than 25 of the vendors were from the New York area.

If there was an unfortunate non-beer lover in the house, Crabbie’s, Down East Cider House, Ace Cider, and Angry Orchard were offering helpings of ginger beer and seasonal cider (like Ace Cider’s “Pumpkin Cider”), but despite the alternatives, the day simply revolves around the best in brews. For the total beer enthusiast, perhaps inspired by some of the day’s finest microbrews, Brooklyn Brew Shop was not only pouring their “Chocolate Maple Porter”- which is rich and dark with a slip of caramel- but also selling their famous beer making kits for the more lofty and crafty beer aficionados. Speakeasy Ales won in our eyes for coolest bottle: a Metropolis Ale brew where bottlenecks peered and leered over a six pack holder. It didn’t hurt that their “Baby Daddy IPA” was the perfect mid-session refresher.

While we meandered, there were loads of non-alcoholic party pleasers to distract guests from the seemingly never-ending array of taps. Whole Foods Market had a life-size 6 pack (of people!) that made for excellent photos, and their crowd-favorite pretzel necklaces could be seen on almost every attendee. Sponsor Flat Rate Moving meanwhile knew that no good event was complete without a photo booth, and the addition of an Instagram Bingo game with a lucrative prize proved most difficult. Obviously, we came up short.

Other standouts included Third Rail Beer with their ever popular “Skyland,” Smuttynose Brewing with the afternoon’s best “Pumpkin Ale” that was malty and fruity instead of heavy, and, of course, Brooklyn Brewery’s “Intensified Coffee Porter” that was the perfect kick-in-the-pants to keep us going during the marathon four hours of beer tasting. As the day wore on, we were treated to gorgeous views of the skyline as the sun began to set. Many patrons filtered outside to mingle at picnic tables, to grab a drunk snack, or to squeeze in one more competitive game. After a round of cornhole proved fruitless, we called it a day as well. Our complementary Fodor’s Brooklyn totes were stuffed with beer koozies, bottle openers, Zico coconut waters, and Kettle Brand chips. We left feeling quite satisfied (and tipsy) as we stumbled out of the Expo Center, and frankly, the French fries that we ordered once back in our apartment never stood a chance.