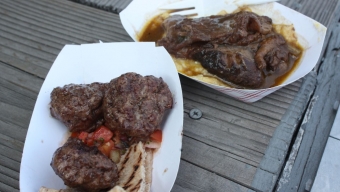 The Running of the Bulls is an internationally known tradition stemming from Pamplona, Spain that traces its origins back to the 14th Century. It was only fitting then for New York City to celebrate the event’s lineage by aligning itself with a similar event with a culinary twist, upon which meat-eaters may feast. Inspired by the rich history of the Spanish culture, Running with the Beef was born, and we were there to witness its inaugural run (no pun intended) on Saturday afternoon.

Located along the scenic East River, we joined a few hundred others undeterred by the sweltering temperature to enjoy an afternoon filled with Spanish beef and refreshing pours of craft beer. Owner and proprietor of East Village bar Jimmy’s No. 43 and president of the host team Food Karma Projects, Jimmy Carbone was inspired by the recent rise in Spanish craft beers. In a booth named “Cervesa Artsesana” (artisanal beer), we were able to enjoy several different beers, although the Domus Aurea IPA stood out as our favorite. We also became addicted to the “Kalimotxo,” a red wine and cola concoction mixed and served over ice. It was exactly the refreshing flavor we needed on the very sunny day.

As excited as we were about the drinks, it was the red meat that rightfully took center stage throughout the afternoon. Delicious hunks of tender beef took many forms in dishes prepared by the participating chefs on hand. Among these salivating dishes, Brooklyn’s Schnack served up some “Beef Sliders,” so succulent that we had no choice but to return for seconds. Topped with a secret sauce and a smoked paprika seasoning, each tender burger was enveloped in a soft fluffy bun that packed in a sea of different flavors. Gramercy’s Casa Mono meanwhile prepared some delicious servings of “Oxtail Wrapped in Spanish Peppers,” mixed with vegetables. The result was absolutely delectable. The “Abondigas” or grilled meatball skewers from Jimmy’s No. 43 seemed to be the most in-demand dish of the night, and while we patiently waited out the particularly lengthy line, we were more impressed by their savory “Beef Tongue Tacos,” our favorite dish of the event.

Although the gorgeous venue and mouth-watering food would have sufficiently kept us content, Food Karma outdid itself by also providing a DJ who kept the atmosphere laid back and joyous, alongside half hour Flamenco lessons for VIP ticket holders. While we didn’t join in on the lesson, we very much enjoyed watching the eager crowd take part in this other rich Spanish tradition. Though the first ever Running with the Beef is now in the books, it’s our hope that the event becomes a summertime rite of passage, joining the likes of Pig Island and Brisket King of NYC as events from the Food Karma team that we can mark off on our calendars as can’t miss, year in and year out. Ole!