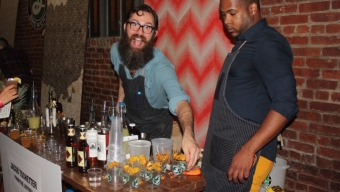 The folks at TableHopping.NYC gathered together on Monday evening with the help of some of New York City’s most highly regarded bars for a spirited evening of competition. Williamsburg’s Brooklyn Brewery would play host to the 2015 “Beer Cocktail Showdown,” where inventively crafted beer-infused drinks would be put to the tasters test amid a festive summer night. The only mandatory rule in place: each contestant had to utilize one of Brooklyn Brewery’s own beers in their recipe. With that in mind, we joined the small crowd that had already formed a line outside the Brewery’s front doors in anticipation for some good old-fashioned drink tasting.

With six different participants from Brooklyn and Manhattan, there was plenty of action going on inside of Brooklyn Brewery’s iconic space. The friendly TableHopping.NYC crew eagerly led us inside where each station was adorned with unique wall prints behind them, created by Brooklynteriors. Though the evening was a competition, the combatants could not have been any more accommodating. Candidly, it was the sweeter styles of drinks that immediately caught our fancy. Popular East Village bar Boilermaker started us off with a cocktail called “The Hammock,” where Mixologist Sam Gauthier concocted a seasonal drink infused with banana liqueur that proved to be the perfect kickoff to the summery night. Meanwhile, Jon Katayama of East Williamsburg’s Huckleberry Bar served up a gin-focused drink called “The Hero’s Journey,” paired with lemon juice and Brooklyn Brewery’s “1/2 Session Ale.” Initially, the drink was a bit fruity and frankly the fact that it needed an extra kick left us a bit underwhelmed. But the drink immediately changed the very moment that we mixed in the provided lemon and as a result we were fairly impressed by the finished product.

Guillermo Bravo’s “Pirates Panther Princes” from South Williamsburg’s Featherweight had us salivating at the thought of a sriracha-infused drink, but collectively the cocktail proved to be a challenge for our tastebuds. In similar fashion, The Jeffrey’s “Smoking Aces” courtesy of Jacob Tschetter was an equally acquired taste with the overwhelming peppery flavor profile being a bit too adventurous for us. Opting to return to the sweeter side of things, our favorite cocktail of the evening came from Oficina Latina and Mixologist Luis Zhumi. The Nolita bar served up a “Lychee IPA Beer-Jito,” creatively using hops-heavy beer and tropical fruit to complement each other admirably. The addition of fresh mint- an ingredient that quickly ran out- secretly brought together all of the flavors in brilliant fashion.

Following a final taste of Mixologist Justin Olsen‘s celery juice laden “Dawn Patrol” cocktail, courtesy of Prospect Heights’ Bearded Lady, we headed to the bar area where Brooklyn Brewery generously allowed us to guzzle down some of their beers on tap. We ran the traditional gamut from their “Lager” to their “Double IPA” as the awards presentation was set to take place. The People’s Choice Award went to Luis Zhumi’s “Lychee IPA Beer-Jito” while the Judges voted for Jon Katamaya’s “The Hero’s Journey.” Considering these had been our two favorites, we cheered along with the rest of the crowd with whom we mingled. Summer 2015 is already off to a great start courtesy of the team from TableHopping.NYC who proved on Monday night that sometimes you don’t need to choose between a beer or a cocktail-  you can have the best of both worlds, all in the same glass.