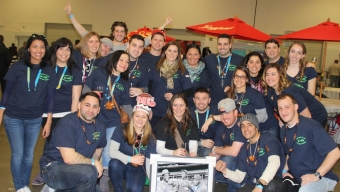 More than 150 different beers from around the globe proved once again to be the drawing card for thousands of suds-loving craft enthusiasts on Saturday afternoon. For the fifth year in a row, the International Great Beer Expo returned to the nearby Meadowlands Exposition Center across the Hudson River in nearby Secaucus, New Jersey- affordably priced as always, at just $42. Each three and a half hour session was jam packed with folks looking to tie one on, armed with a thirst for new tastes and an empty two ounce tasting glass to lead them in the right direction.

The annual Expo is a bit overwhelming at first with the prospect of more than eighty different brewers laying ahead. But the sprawling space is perfectly outfitted from its arrangement of beers to its options for seating and wait times for any drink of choice is typically minimal if at all. Although a preponderance of international beers were being poured, the number of local breweries from the Metropolitan area was equally as impressive. Previous unknowns like Cape May Brewing Company, New Jersey Beer Co. and Bergin County’s Bolero Snort fit in seamlessly next to some of our old favorites from Saranac and Ithaca Beer Co. as we walked down the line from brewer to brewer.

Early on we stumbled upon Philadelphia’s Monk’s Cafe- the widely lauded beer and mussels restaurant was pouring their “Flemish Sour Ale,” a nicely sweet sour cherry style beer that we returned to time and time again. On the hunt for fruit-forward pours, we made a stop at Schofferhofer’s table where the German brewer was doling out samples of their “Grapefruit Radlr,” a deliciously unique light-bodied wheat beer that delivered more than a subtle touch of sour grapefruit. Though it’s got an alcohol content of just 2.5%, it’s an approachable beer that we’ll certainly be revisiting in warmer months. The best of the bunch though came from Leinenkugel’s where their outstanding “Cranberry Ginger Shandy” was perhaps our favorite pour of the entire afternoon. Sweet and delicious, each tasty sip seemed to taste less like beer and more like cider because of the balance between the ginger and fruit. But the distinction matters little. The Shandy itself was both tart and seasonal- a perfect pairing for a slush-filled winter weekend.

As has become the norm in recent years, ciders are becoming more and more prevalent at each beer event. Pours from Crispin, Strongbow, Original Sin and Magners proved to be excellent samples to change the pace from the never-ending supply of suds, but Sir Perry’s “Pear” flavored cider proved to be an immediate favorite. Coupled with a strong pear aroma and a decidedly dry finish, the medium bodied pour was crisp and refreshing in washing down some samples that we grabbed from The Jerky Hut.

With the ciders and fruit beers out of the way, it was time to buckle down and drink some old favorites. Fortunately, Victory Brewing Company’s “Anniversary 19″ was a session IPA that stayed with us. Nicely hoppy but light enough for more casual drinkers to be approachable, the beer wasn’t overly malty with a pleasant punch of citrus for good measure. Other standout beers included Australia’s “Baron’s Pale Ale,” Cricket Hill Brewery’s “Belgian Dubbel” and Great Lakes Brewing Co.’s toasted “Conway’s Irish Ale” as notable highlights. But after an hour or so of tasting Weyerbachers and Heinekens, Flying Fish Brews and Thomas Hookers, and enough pours of Long Trail Brewing Co. to make your words a bit more slurred, many of the fantastic beers seem to run together. And that’s why it makes sense to whip out your trusty camera to commemorate every beer that you tasted- and to remind you of all the ones you’ve forgotten.