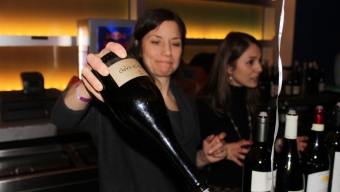 Sometimes there’s simply nothing better in wintertime than curling up next to a fire with a hearty bottle of wine. In reality, not many of us in New York City have access to a working fireplace, but with the essence of that theme in mind, Saturday marked the Sixth Annual NYC Winter Wine Festival, returning for two jam packed sessions to the Best Buy Theater in Times Square. Despite the frigid temperatures during the three hour evening session that had us yearning to be parading around the neighborhood in a head-to-toe Elmo costume, once inside we were quickly warmed up by a delicious spread, friendly faces and outstanding wines.

Normally utilized as a concert venue, the Theater is perpetually transformed into a its very own tasting room, replete with more than 250 different wines from around the world. It’s a reasonably priced opportunity for novice drinkers and expert oenophiles to unite and sample new tasting experiences for the very first time as contemporary jazz is performed live right on the legendary stage in front of the room. Before getting started, our glasses remained empty as we filled up on an array of distinctive meats, cheeses and breads which would prove pivotal to our enjoyment of the evening- a delicious precursor for what would follow.

Although the space was packed with thirsty wine enthusiasts, the Theater to its credit tends to utilize every bit of space to host different pouring stations. Many folks might prefer that the wines be separated by region, but with each distributor bringing a selection curated by Vintry Fine Wines, it’s a nice change of pace to be able to taste some wines from California, Italy, France and New Zealand all at one table to gain a better understanding of one’s palate. With commemorative wine glasses in hand, we began to taste our way around the world beginning with the pacific northwest and the affordably priced bottle of “The Velvet Devil,” a 2013 Merlot from Washington came calling toward us. At just $13, the complex red bursted with cherry from the first big sip, nicely spiced through the finish.

Continuing with red wines, the similarly delicious yet entirely different Viticcio 2012 “Chianti Classico” was a particularly notable wine. The approachable berry-forward flavors were evident from the nose but the aftertaste was decidedly filled with citrus. Overall, just a nice, easy drinking table wine priced at just $15. Other reds like the soft Portuguese “Claudia’s 2009″ from Quevedo, the subtly floral “Lacrima di Morro D’Alba” from Velenosi (Italy) and the uniquely concentrated “Vacqueryras Cuvee Classique” from France’s Domaine le Couroulu each proved particularly noteworthy in our wine fueled journey.

Several white wines though also stole some of the show. At just $9, the “Quinta de Gomariz QG Loureiro Colheita Seleccionada” (try asking for that at your wine store), from the Vinho Verde was perhaps the best value of any wine that we enjoyed during the evening. Lightly carbonated without being overly sweet, each crisp sip was utterly refreshing. Speaking of refreshing, Otto’s Constant Dream, a New Zealand sourced “Sauvignon Blanc” is becoming one of our very favorite whites. Pleasantly ripe with green apple and citrus, the bouncy aromatic wine is a steal at just $13. Â Though there were seven or eight whites that we returned to time and time again, these were our go-to pours as the evening wore on.

If you’ve noticed a pattern here it’s that despite being highly rated, the hand-selected list of wines are also entirely affordable. Granted you’ll find your outliers, but part of what makes these events run by the folks at NewYorkWineEvents.com so interactive is how easy it is to afford and purchase many of the wines being showcased. Sometimes you don’t have to break the bank for a truly fantastic bottle of vino- evidenced by the vast array being offered at this year’s Winter Wine Festival- another in a line of seamlessly executed grandiose events.