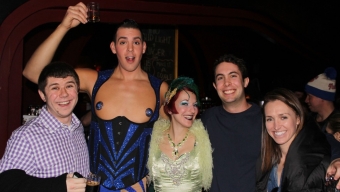 Back for act three, or perhaps more appropriately ‘Acte Trois,’ Saturday afternoon turned to evening with the help of the now annual East Ville Des Folies, a celebration of the 1920′s. For three full hours, guests donning festive attire indicative of the era swarmed the multi-leveled Webster Hall where the beer and whiskey flowed freely. And with live jazz music, a bevy of trapeze artists, burlesque dancers and other circus acts paraded around from room to room, adding to the aura of one of the winter’s most well attended attractions.

Nearly 130 years since the venue first opened- rumored to have been a former haunt and property of one Al Capone- there was a quickly moving line of attendees wrapped around the block in anticipation to turn back the clock. Once inside, the fun was infectious as guests were handed a commemorative booklet and a tasting glass before being sent out on their way to explore their surroundings. Almost immediately, the live music seemingly in each room from The Studio to The Marlin Room transformed the affair from a beer and spirits tasting to an all out party. Michael Arenella and His Dreamland Orchestra meanwhile held it down in The Grand Ballroom, which housed all of the delicious beers being poured all afternoon long.

Speaking of beer, we paced ourselves around the room methodically veering in and out of foot traffic for our sought after pours. Among our first stops were Troeg’s “HopBack Amber Ale,” a malty, medium bodied beer and Narragansett’s “Autocrat Coffee Milk Stout,” a thicker brew with an overwhelming array of potent coffee through the finish. Both we tasted for the first time and both impressive in different ways. But both paling in comparison to the offering from Bronx Brewery whose “Belgian Style Pale Ale” is currently retired by the brewery, but it’s one we’ve grown quite fond of. Deliciously citrus-filled, the white foam head proved nicely refreshing compared to some of the heavier pours on display around the room.

Gulping down some other refreshing styles, we grabbed some of Crabbie’s “Cloudy Alcoholic Lemonade” and cider pours from McKenzie’s, Badass Hard Cider, Ace and Rekorderlig, where the “Pear Hard Cider” was our hands down favorite of the day. We slurped down a few pours of “Easy Blonde Ale” from Alphabet City Brewing Co. before heading to the heavy stuff- an array of different whiskey.

With dozens upon dozens being poured, you couldn’t swing your 1920′s style suspenders without hitting a spirits purveyor. Fortunately, we stumbled upon a familiar brand where Jack Daniel’s “Single Barrel” greeted us like an old friend. Slightly less sweet than the more popular No. 7 blend, rich honey and cinnamon flavors were prevalent from nose to taste. Nearby, Woodford Reserve’s “Distiller’s Select” also made an immediate impact on us. With a flavor profile that is best described as a mesh of chocolate and citrus, the spice-filled finish was satisfying and unbeatably smooth. Eschewing more of the big name brands, we went wild for the independent makers of “Teeling Whiskey,” a creamy vanilla blend that we sipped upon for the very first time. The herb filled finish only furthered our love affair with the nicely spiced Irish spirit.

After a few hours, we were ready to jump on stage with the live jazz bands despite being both under dressed and unprepared to do so. Instead, we took a step back and surveyed the hundreds upon hundreds of folks that filled the spacious venue either sipping on whiskey or chugging down pours of Dale’s Pale Ale, Empire Brewing Company’s “Amber Ale,” and Broken Bow Brewery’s “Broken Red Ale.” Whether the music or the booze fueled the attendees inside, Act Three of East Ville Des Folies proved once again to be the bees knees in turning back the clock in a way that would make even Al Capone himself proud.