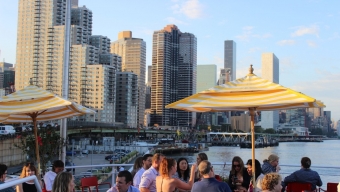 Set amid the backdrop of the sun setting along the East River, the folks at Edible Manhattan hosted a seasonally appropriate food tasting event at Murray Hill’s The Water Club on Wednesday evening. The event would benefit the Northwest Atlantic Marine Alliance, welcoming in dozens of guests to the waterfront space rife with fresh seafood and unlimited drinks to appease the after work crowd’s collective appetite. For three full hours, eventgoers were able to kick back and imbibe in an unparalleled summertime setting.

We were among the first to arrive at The Water Club, where we were whisked to the second floor  outdoor patio. Despite threatening all week, the thunderstorms held off during the course of the evening which allowed guests to really bask in what was left of the day’s natural light. Wine and spirits purveyors outlined a small tented area to house guests for the event while small and tasty bites courtesy of Dock to Dish would be brought out by a sea of young servers- and subsequently swarmed by all of the attendees at once in vulture-like fashion. That said, eats like “Cheeseburger Sliders,” “Buffalo Skate Wing,” “Shrimp Kebabs” and “Bluefish Tacos” made plenty of rounds and were particularly delicious.

Washing down many of the hors d’ouerves were an assortment of locally crafted cocktails courtesy of Atsby Vermouth, Stillhouse Whiskey and Widow Jane, whose lemony ‘Rye Not’ drink was pleasantly refreshing. Though the crisp pours of Brooklyn Brewery’s “Summer Ale” certainly hit the spot, we found ourselves returning time and again to chat with the ladies of The Lenz Winery from North Fork. The Long Island boutique winemaker was pouring three different varietals- the standout of which was a 2011 white blend of Gewurztraminer and Pinot Gris called “Tete-a-Tete.” Exotic and flavorful, the subtle wine proved perfect in pairing with much of the evening’s seafood- including a “Fried Calamari Slider” served on a rustic focaccia with aioli.

Though Edible’s “Seafood Soiree” was a relatively small affair for the magazine and online outlet, it was certainly tasteful especially considering the refined atmosphere. This wasn’t an evening to drink as much as possible and get sloppy drunk with your pals and despite the preponderance of delicious alcohol, the “Soiree” was more about savoring the taste of the selection of drinks in front of you. But as far as the food went- you were better off scarfing down whatever you were able to grab- as the vulture hands certainly seem to come out in the summertime.