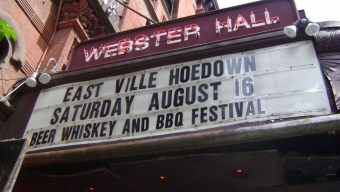 Bacon. Whiskey. Barbecue. Gold fringe jumpsuit-clad cowboy singing countrified Van Halen covers from atop a mechanical bull. All that you’d expect and more came together Saturday afternoon at the appropriately titled “East Ville Hoedown,” packing folks into each of Webster Hall’s three levels. The venue embraced the best of country living to create a departure for New York City’s cowboy and cowgirl wannabes, filling their rooms with the sights, sounds, and tastes of the midwest.

Upon arriving, patrons were greeted by cold beer and offered “I <3 Bacon” hats before moving towards the first floor’s bars and food tables. The Susquehanna Industrial Tool & Die Co.‘s retro country swing and rockabilly stylings were on stage providing the upbeat soundtrack for our first round of bacon-based delights. East Village Social’s “Bacon Mac-n-Cheese” generously incorporated the ingredient of the afternoon, while Pig Guy NYC cut right to the chase with their savory “Bacon on a Stick” in a sriracha glaze. The theme carried over to the bar, which featured whiskey and moonshine cocktails all with bacon-based garnishes: bacon sticks, bacon salt, candied bacon, and bacon dust. Our favorites included “The Pig’s Old Fashioned” made with Woodford Reserve and “Wilbur’s Clean Cut,” with Old Forester bourbon and a dash of cayenne for a kick of good measure. For those particularly inclined to the celebratory bacon beverage, Evan Williams offered the bourbon based “Swine King” with prepared with lemon and Champagne. Guests also had the opportunity to cleanse their pallets with a sample or six of the whiskeys being featured in the cocktails, bacon-free.

Upstairs, the brave lined up for their photo-op on the mechanical bull, which claimed its victims for the duration of the three hour late afternoon event. On this level, House of ‘Que served up sandwiches packed with “Chopped Brisket” and tortilla-wrapped “Spicy Sausage” in a Jack Daniels glaze. There was a brief break in bull riding when a performer, appropriately wearing plaid and denim, twirled on a hoop suspended from the ceiling. Despite this risky feat of acrobatics, the crowd was most impressed by the ability of Van Hayride to countrify hits from Van Halen, Black Sabbath and even Madonna. Their lead singer provided colorful commentary and encouragement to the bull riders, even taking a swing at it himself during his rendition of “Jump.”

For those who still had some remaining room room (somehow, we did), the balcony level had dessert offerings all incorporating, what else, bacon. Robicelli’s “The Maltz Brownie” had generous bacon bits throughout its fudgy brownie, leaving no question why it won the Best Dish at the 2013 Bacon & Beer Classic. Meanwhile Macaron Parlour’s delicate “Maple Cream Cheese and Candied Bacon Macaron” was a delightful bite and a half. Tipsy Scoop took it one step further and added the booze of the day in its “Maple Bacon Bourbon Ice Cream.” We saved the sweetest cocktail until after dessert, enjoying the “Salty Saturday” with Jack Daniels Honey as we made our way back downstairs.

While the crowd disagreed on the best use of bacon, the consensus seemed to be that a hoedown was a much welcomed change to the ordinary New York City weekend. Webster Hall’s “East Ville” event was advertised as the “1st annual,” which we hope means that a return of the country vibe and the bacon-centric focus is in store next year. Our arteries may not agree- but they’re usually way too uptight as it is.