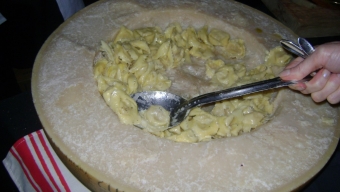 Tuesday evening, Chelsea haunt Backbar would play host to a stimulating night that mixed together culture and cuisine, Italian inspiration and poetry, and a slew of guests simply looking for a taste of it all. Presented by Verona’s Giovanni Rana, whose restaurant at Chelsea Market has become a west side staple, “The Pasta Poetry Duel” served up some delectable eats and summery drinks amid the creative lyrical entertainment to celebrate some freshly cooked pasta.

Comfortable yet refined, Rana and his team were among the first folks to welcome us into the space serving up pastas that were at once familiar and innovative.Â Â Ravioli I was familiar with.Â  Crispy ravioli encasing artichokes, or ‘carciofi’ as Mr. Ranaâ€™s glamorous translator explained, not so much.Â  Deep-fried to deliver the delicate, buttery filling, the first bite of the evening was a welcome variation to an old favorite.Â Â  Pepper sprinkled atop the light pasta shell helped balance the earthy and slightly sweet insides without overwhelming, earning these the rank of evening favorite. Â The group we had only just met watched earnestly for our reactions, indicative of the warmth our hosts showed us all evening.Â  Pasta had been described as appropriate for everyday and every meal, sweet and savory, formal and casual, and every style would be on full display during the course of the event.

The second most important person to know at a pasta party, after the creator himself, is the man passing the fried pasta.Â  I did not know this before meeting Bruno, toter of tortellini, but caught on fast as he continued to bring new and delicious pastas to my attention.Â Â  Somewhere between a wonton and the traditional Italian soup favorite, fried tortellini accompanied the ravioli as passed appetizers.Â  Dangerously poppable, these bites were another departure from the traditional pasta that we expected as more traditionally, a nearby chef fired up multiple Giovanni Rana filled pastas and sauces.Â  Pesto, alfredo, marinara and Bolognese sauces kept mushroom ravioli, prosciutto tortelloni, and spinach and ricotta ravioli company on my plate, which I deemed too small halfway down the line.Â  The pesto was well balanced, with remarkably fresh basil and hints of gentle garlic, far more complex than something you’d expect to find on a store shelf.

While the industrial room continued to fill up with excited guests, wine and Italian summer cocktails were served to combat the newly arrived summer heat.Â  Pallini limoncello was on site with a signature cocktail, the “Pallini PLB,” a sweet, crisp alternative to the other featured aperitif, the “Negroni.”Â  Luca Pallini, fifth generation limoncello producer, showed off some pictures of his familyâ€™s prized Sfusato lemons before the poetry battles began.

Purple flowers hung from the ceiling above The Haiku Guys (and gals) where they were typing diligently for guestsâ€™ requests, warming up for the upcoming poetry duels.Â  Â A vintage typewriter box had â€œFree Haikuâ€ irresistibly taped at the start of the line of bowed heads, each rapidly counting syllables and pounding keys.Â  I suggested â€œhealingâ€ as my inspiration as I am recovering from some bumps and bruises and was delivered this lovely diddy within minutes:

â€œonce more today, down
the summer air licks my scrapes
and thank God for thatâ€

The poets later dueled via multiple formats, eliminated by a panel of judges after only a few moments of inspiration from the house DJ.Â  Subject matters were dished out directly from the recently satiated audience and included, unsurprisingly â€œPestoâ€ as one such appropriate theme.Â  The poets responded capably but battled against the difficult acoustics of a high ceiling, a mic-less stage and some noisy collaborations in the photo booth at the back of the room.Â  At one point the air conditioning was shut off to help reduce the noise, but had the unfortunate and predictable side effect of heating up the crowded room, further distracting from the performances.Â  After the duel was completed, Bruno brought back the final fried pasta innovation- a spindly linguine dusted in powdered sugar.Â  The light crunch was reminiscent of cannoli shells, easily imagined atop semifreddo, as a nest for gelato, or in a giant bag at my desk.

When pressed with explaining the background behind combining pasta and poetry, Rana suggested that all chefs have the instinct to create art and many consider their creations their own sort of poetry.Â  He then asked if I was there to admire â€œla poesia or la pastaâ€.Â  I think his companion said it best when she repeated the only important part of my answer and added a triumphantly raised fist to say, â€œLa Pastaâ€.