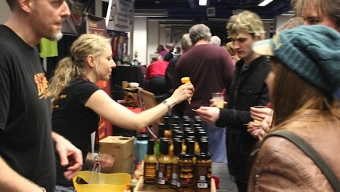 While most people in New York City were outside trudging through a cold, rainy day, a lucky group was tucked away inside the Penn Plaza Pavilion sweating through the second annual New York City Hot Sauce Expo. Over 45 of the mostly local and all natural vendors exhibited their hottest and tastiest concoctions this weekend, selling everything from jalapeno chips and pepper jellies to different jerky and some good old-fashioned spicy as all hell hot sauce.

The Penn Plaza Pavilion is a small sect of a building located directly across the street from Penn Station. The expo brought on some truly serious heat, but that remained the only serious part about it. With help from sponsors Lagunitas Brewing Company, the frat party vibe was apparent almost immediately upon entering. People were not just here for the condiments, they were here to party. And I was about to find out why.

Puckerbutt was one of the first tables that I visited. Almost immediately, a guy spun away from the table, red faced, sweating, and teary eyed. He stood, momentarily fixated, trying desperately to cool his mouth by sucking in huge breaths of air, then wandered, dazed, back into the crowd. One of the workers from Puckerbutt said that the victim had just taken 3 drops of their extra hot chili oil, called “Repair Venom,” which he then waved in my face and tauntingly suggested that I follow suit. While my pride suffered a bit from my refusal, I knew there was no way I was making it out of that booth alive after a few drops of their potent elixir. I turned away and watched enviously as another entrant entered the fray, calmer and cooler than the rest of us, equipped with a half gallon of milk to quench his impending fiery demise.

The two day festival occupied much of this past weekend, but Saturday’s stars were given “Screaming Mimi” Awards, with notable ones going to Hellfire’s “The Elixir” for the best fruit based sauce and Grinder’s “Near Death” for the best label artwork. Countless sauces, jellies, and related chili products later, I found myself imitating the air sucking noises I had been hearing throughout the day and searching desperately for the bar. I began to realize that not only was there some method to the drunkenness, but that it was absolutely essential for pure survival.

You can almost guarantee that at some point before leaving the hot sauce expo, your mouth had been shown what “being on fire” actually meant, you’ve spent some time dreaming of milk jugs, and your bag would be weighed down with several chili pepper products that you never knew you needed. There are a few musts for attending a hot sauce tasting that I learned from my experience here. Let’s label these as the definitive Hot Sauce Expo Rules going forward. First, Do not listen to anyone’s opinion on what is “mild” or “hot.” They are weather wrong or lying to you. Second, Do not go anywhere without something, anything, to drink. I do not care what something or anything is. Bring it with you and keep enough of it at your side. Third, Above all else, Remember that a tasting of hot sauce is not actually a full spoonful just because that is what you are offered. You will undoubtedly learn this the hard way, and it’s these obstacles that you must persevere through to recognize how much fun you actually had.