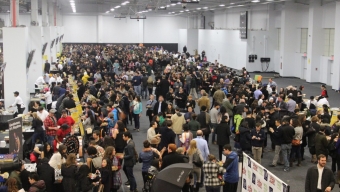 The Village Voice’s 7th Annual ‘Choice Eats’ event returned for their seventh annual eating frenzy on Tuesday night, moving the feast from the confines of the Lexington Avenue Armory to the downtown sprawling Basketball City. 2014 would be perhaps the Voice’s most ambitious undertaking yet with upwards of eighty different vendors being brought in from Manhattan, Brooklyn, Queens and even New Jersey to dole out samples to the hungry masses. And with General Admission tickets priced at just $60, ‘Choice Eats’ isn’t simply among the most spectacular eating events of the calendar year, it’s also among the most reasonable.

There was no lull to speak of even as the VIP Hour commenced at 6pm as those in the know flocked to some of the more highly anticipated food tables in advance of the crowds that would follow. With tasting glasses and ‘Choice Eats’ guidebooks in hand, we began to traverse around the room, picking and choosing our spots based solely on what looked most delicious. Unfortunately, we didn’t make it all that far though as The Meatball Shop was front and center at Table #1. The exploding empire of Michael Chernow and Daniel Holzman now offers four locations in Manhattan and one in Williamsburg, and with good reason considering how they’ve harnessed the perfected creation of a comfort food staple. Their offering on this night, “Beef Meatballs with Classic Tomato Sauce,” was their signature take on the most traditional meatball, lacquered in The Shop’s sweet, delicious tomato sauce and sprinkled with fresh parmesan cheese. It only lasted two bites, but each morsel was utterly scrumptious.

In between tastes we slugged down smaller beer pours from Lagunitas and Blue Point Brewing, two of our perennial favorites as well as Smuttynose Brewing Company. But we found ourselves returning to the Stella Artois Beer Garden in the corner of the massive room more often than not for larger pours of Stella, Widmer Brothers and Goose Island “312 Urban Wheat” beers, despite a steadily growing line as the evening wore on. Though we shied away from the spirits on hand as we were stuffing ourselves with food, the likes of Tito’s Handmade Vodka, Four Roses Bourbon and Barefoot Wine & Bubbly all seemed to be fairly popular with the crowd in attendance on this night judging by the collection of folks in front of each table.

Maintaining a steady pace of noshing proved pivotal in surviving the main ‘Choice Eats’ floor with so many samples to choose from. We’ve showcased pictures from some of our favorites below, but there were plenty of tasty eats that were worthy of praise. Familiar staples like John Brown Smokehouse’s “Smoked Pastrami with Cole Slaw” was creatively dubbed ‘The Best BBQ You Have Ever Tasted’ and after sopping up each tender bite of pink meat with our triangle of white bread, we were hard pressed to argue with them. Luke’s Lobster’s “Maine Crab Roll” was unsurprisingly a huge hit and as usual, drew the longest line of waiting guests during the evening. The buttery hot dog roll and fresh white crab meat just pairs together incredibly well, reminding us time and time again how thoroughly Luke’s has truly mastered the art of perfectly prepared seafood rolls. Meanwhile, No. 7 of Fort Greene, Brooklyn saw their samples run out fairly early in the evening. With a “Shrimp and Mortadella Salad” served over fresh Brussels Sprouts and doused with a Black Vinaigrette, the shop instantly soared to the top of our short list for the event’s best dishes as the seemingly strange pairing of these elements worked together excellently.

Though we made sure to visit some of the usual suspects - Kuma Inn’s “Adobo Braised Pork Shoulder and Pan de Sal” was salty and succulent and was our favorite overall dish of the evening, while Swine’s “Bacon Wrapped Dates” were a close runner-up – it was some of the lesser known restaurants that really struck our fancy. Hell’s Kitchen’s ramen haunt Tabata Noodle served a fantastic “Dark Men,” or a black sesame paste noodle soup with crunchy scallions and small hunks of spicy pork. With a city-wide resurgence of ramen, it was nice to taste such a well rounded style noodle dish in this setting. The “Lemongrass Chicken Taco” from Xe May Sandwich Shop on St. Marks Place, the “Sweet Heat Grilled Cheese” from Brooklyn’s Mrs. Dorsey’s Kitchen (VIP) and the “Greek Coffee Steak” from Astoria’s Ovelia Psistaria Bar (served with Poutine!) were each uniquely tasty in their own right.

As crowds began to swell during the three hour event, we had room for basically one dessert before reaching our personal limit. Options included local favorites like Liddabit Sweets, La Newyorkina, Butter & Scotch, and Hoboken uber-favorite Carlo’s Bakery, but it was Robicelli’s “Chocolate Chip Cookie Bars” that were out of this world. Richly sweet, the pretzel infused cookie bars were sizable and decadent and once washed down with an ideal helping from Pushcart Coffee, we knew that our evening was finished. But not before we reflected upon a night filled with incredible food tastings and pairings and learned about some new spots in New York City that we are focused on visiting in person. Because if a restaurant is good enough to be a part of the Village Voice’s ‘Choice Eats,’ it’s certainly good enough for us.

If you missed out on the festivities of Tuesday night’s ‘Choice Eats,’ you don’t have to wait until next year – the outlet returns on May 7th with ‘Choice Streets,’ an unparalleled outdoor tasting of more than twenty New York City food trucks aboard Pier 86 of the Intrepid Sea, Air & Space Museum. And tickets are on sale now! 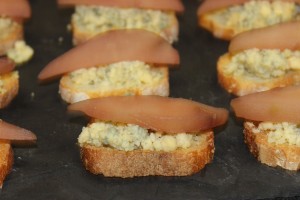 No. 7 - Shrimp and Mortadella Salad, Brussels Sprouts with Black Vinaigrette