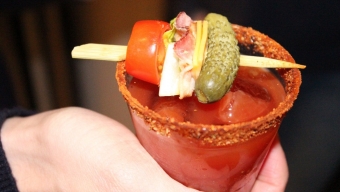 The Bloody Mary has long been a staple of the weekend brunch here in New York City, be it to kick off a day of drinking or to rally from the previous night’s hangover with a ‘hair of the dog.’ On Saturday afternoon, more than fifteen notable local restaurants gathered at East Village Italian-nouveau restaurant L’Apicio for a three hour all you can taste event entitled “Eat, Drink & Bloody Mary,” a friendly competition between bartenders and their staffs to crown New York’s finest Mary maker. And if we learned one thing by being up to our eyes in tomato juice, it’s that all Bloody Marys are not created equal.

Now, it’s been awhile since we took the time to slurp down this many Bloodys and we weren’t the only ones yearning for a Zantac as the day wore on- thick tomato juice, horseradish, Tobasco- you get the picture. Fortunately there was plenty of free bottles of Fiji Water and Vita Coco to go around to wash down some of the heartier drinks from the event. But that said, more often than not we were impressed by the sheer creativity that went into each drink, which were not only deliciously tasty but also aesthetically pleasing with an array of distinctive garnishes. Attendees were handed a plastic golden coin upon checking in which would be used to cast their vote for their favorite concoction of the afternoon. Some of the competitors let their drinks speak for themselves while others went out of their way to be both engaging and persuasive in vying for each elusive vote.

Tito’s Handmade Vodka, as the event’s official liquor sponsor, was the sole ingredient incorporated by every participant to ensure parity amongst the competing restaurants, but the similarities truly ended there. Rather than run down the elements that comprised each tasty entry into “Eat, Drink & Bloody Mary, it’s probably more important that we hand out our own superlatives. The first Bloody Mary that we tasted happened to be the spiciest of the entire event as the expert mixologists at Booker and Dax served up a “Bloody Mahabharata,” which thankfully offered up a slice of sweet pineapple to cool down the mixture of yellow curry and birdseye chili that served to ignite our taste buds. The flavors worked together admirably despite the drink’s fiery flavor profile.

The day’s most refreshing Bloody Mary came courtesy of The Wren, where Melissa Derfler’s “Happy As A Clam” sported a fresh baby clam atop each bright red cup, mixing in a sprig of dill and a thin cucumber slice for good measure. There’s something about raw shellfish and cucumber that exude a sense of summer, and The Wren captured the feeling perfectly, despite a cold winter afternoon outside. Nourish Table & Kitchen’s “Beauty and the Beet” was hands down the most inventive drink of the event, utilizing beet-infused vodka as the purple base punched up by Worcestershire sauce, jalapeno, pepper and lemon juice. Though we’re no fans of beets, there’s something to be said for style points and Nourish’s drink stood out amongst the fray. Finally, best garnish goes to the folks at Burger & Barrel, fittingly bringing the “B&B Burger Bloody” as their entrant. Sticking out from their crimson colored cup, rim rubbed with tangy spices were all the accoutrements you’d expect atop a savory hamburger- tomato, cheese, salty bacon, and a gherkin- all of which worked together with a beef stock infused drink brilliantly. Their take on a liquified burger was decidedly outrageous and equally delicious.

As we sipped around the toom, two Bloody Marys took our palates by storm. First, midtown haunt Harlow prepared a “Canary Mary,” a yellow colored drink with bell pepper, lemongrass and ginger with a salty seasoned rub that was reminiscent to a warm weather picnic. The hints of fresh corn could also be savored with each passing sip. Meanwhile, the “Mary Pibil” from Rouge Tomate was our favorite of the day’s offerings. Served with thin strained tomato juice, the chilled sweeter drink sipped like tasty gazpacho with roasted pineapple and espelette pepper thrown in. Though we didn’t anticipate preferring sweet to savory, the creation of Cristian Molina & Zach Moore collaborated ideally and was the recipient of our golden coins. The people clearly didn’t agree with LocalBozo.com however, voting “Extra Fancy’s Bloody Mary” (an outstanding take on a traditional Bloody) the People’s Choice winner and newcomer Dover (“Phuket Mary” with crispy crab, peanuts, fish sauce and Thai chili) the Judge’s Choice. At the end of the day, everyone in attendance had their particular favorites, be it based upon taste, appearance and even in garnish. The buzz inside of L’Apicio was undeniable though as New Yorkers were treated to an afternoon of imbibing at the hands of some of the City’s most renowned and celebrated drink-makers.