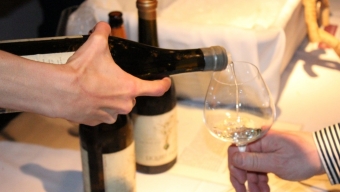 We’re all aiming to strike a balance- be it in your work and personal life, the fine line between taking things seriously and enjoying yourself, in spending and saving and even when cooking in finding just the right amount of flavor. Balance is also an essential part- if not the fundamental element of great wine. For hundreds of years, winemakers have worked to precisely create wines that establish perfect amounts of alcohol, fruit, texture and taste, among a multitude of different variables all of which contribute to the flavor profile of each bottle. Bringing together more than 100 different wines that have struck said balance, an event aptly titled “In Pursuit of Balance” took Tribeca’s Three Sixty event space by storm on Tuesday night as several hundred guests gathered to sample some of California’s finest selections of Pinot Noir and Chardonnay.

The setting for the event was ideal, with three hundred and sixty degree views of the surrounding neighborhood acting as a backdrop behind the clinking glasses and elegantly poured wines. Thirty-one wineries would assemble here alphabetically for only the second IPOB event in New York City, each pouring as many as six distinctive wines from their arsenal into the awaiting glasses of thirsty patrons. Poised with striking a dialogue between the winemakers and their drinkers about the relevance of balance in wines, guests would spend much of the evening chatting at each table for minutes on end about the intricacies of the bottles that sat in front of them. And as we learned, unsurprisingly, California is home to some of the most truly exquisite and exceptional red and white wines on the planet.

Despite the glasses in our hand, we made sure to get our fill on freshly sliced rustic bread and an array of cured meats and cheeses that paired brilliantly with many of the pourings that we would receive. With a base of food in our stomachs, we headed out toward our first table and the friendly ladies at LaRue Wines where we chatted with owner Katy Wilson for a few minutes. We sipped upon the 2011 “LaRue Pinot Noir” several times as the evening wore on, noticing the notes of strawberries and juicy cherries immediately amid an undeniably easy finish. Not far away, we stumbled on to the mother-daughter ownership tandem at Mount Eden Vineyards pouring six different wines for the newly assembled crowd that surrounded their table. Hands down, the standout was the “Estate Bottled” 2008 Pinot Noir which offered a punch of dark fruits and was among the more earthy and bold tastings that we had tried all evening.

Though we prefer red wines more often than not, there were also some noteworthy Chardonnays that delivered a terrific balance. The 1999 “Calera Chardonnay” was a perfect example, poured with an appetizing gold color yielding a richness of white fruit flavors and a relatively light finish. Moreover their Central Coast 2012 Chardonnay is a perfectly fine everyday table wine that is both reasonably priced and refreshingly crisp. Copain’s 2011 “Brousseau” Chardonnay was equally as bright with hints of honey and apple prevalent in each intense sip that delivers a spice filled kick at the finish. We also enjoyed their “Laureles Grade” Chardonnay, also a 2011, with more citrusy elements and no noticeable trace of oak in the light drinkable wine. Other notables worthy of praise came from Chanin (2012 “Bien Nacido Vineyard’ Chardonnay), Red Car (2012 “Ritchie Vineyard” Chardonnay) and perhaps our favorite of the whites – Matthiasson’s 2009 “Linda Vista Vineyard,” which was delightfully clean with a nice lingering finish.

Though choosing a highlight proved challenging, many of the other guests we encountered were in agreement that Soliste’s five wines were the finest of the entire lot- namely, their exceptional Pinot Noirs. First, their 2011 “Nouveau Monde” priced bteween $75 and $100 brought with it a bevy of red fruits and spices that had us returning for repeat pours. Be it plum or pomegranate, the aromatic wine was outstanding with a soft delicate feel. The 2011 “Lâ€™EspÃ©rance” meanwhile, provided a sea of black cherry and raspberry with some earthier notes than its predecessor, but as we learned with the winery’s most sought after Pinot, the collaboration of elements from nose to taste to finish were exactly what you’d want from a Pinot Noir and from a wine that embodies balance to a tee.

As the evening reached its conclusion, we had earned a great deal of new found respect for the winemakers hand selected to participate at “In Pursuit of Balance,” a group that we knew fairly little about prior to Tuesday night. Like most of the guests that surrounded us, we made sure to take copious amounts of notes, eat ourselves full and shoot the breeze with some of the west coast’s most distinguished winemakers over the course of a fun and interactive three hours. Though candidly, with so much wine being offered around us, we had a hard time maintaining a steady ‘balance’ ourselves as we stumbled to the outside of Three Sixty and went on our merry way home.