Three Cheers for Beer, Bourbon & BBQ at The Tunnel 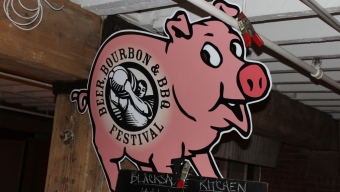 For a fifth year of gluttony the annual “Beer, Bourbon and BBQ Festival” decadently paraded through New York City on Saturday, with two four hour sessions of all you care to imbibe craft beers and tasty bourbons. Succulent pulled pork, sweetened strips of tender bacon and all the customary barbeque accoutrements that one would desire allowed the smells being charred to perfection inside west side space The Tunnel to waft far outside of the venue’s front doors and into the waiting nostrils of the line of hungry guests, eager to enter. The evening portion, dubbed “The Whole Hog Pig Pickin’ Session” boasted four whole hogs being served from the bone and naturally, that’s where LocalBozo.com was meant to be.

With some upbeat tunes provided by rockabilly trio Brambling being performed in the background, the entire space was abuzz with the true spirit of the south. Speaking of spirits, we counted more than forty different varieties from the likes of Fireball and Four Roses to Elijah Craig and Evan Williams. Our mouths watered for a local favorite – Hudson, whose ‘Four Grain Bourbon‘ perpetually ranks atop our very favorite tastings, partially because it can be fairly difficult to find. Definitively rich in taste, the whiskey drinks remarkably smooth with a fairly sweet nose. Now candidly, we don’t spend much time sipping on bourbon with dozens of craft beers in the house, so we capped our bourbon tastings at three before heading on our journey to suds supremacy.

As we often do at beer tasting events, we immediately sought out our friends at The Bronx Brewery who were pouring their American style “Pale Ale” and their “Black Pale Ale,” which offers plenty of coffee meets dark chocolate bitterness from the masters of the genre. Mild in smell and medium bodied in taste, the American “Pale Ale” might just be getting a run for its money from this newer entry. The many rooms of The Tunnel were surrounded by the familiar names in the craft brew game – Samuel Adams, Sierra Nevada, Magic Hat, Abita and Smuttynose were each pouring notable selections. But we supremely enjoyed some of the ‘lesser known pours from the likes of Southern Tier Brewing Company’s ‘Live’ (a light bodied, slightly sweet IPA), Greenpoint Harbor Brewing Company’s ‘Spring Turning Rye Saison’ (a wheat flavored hoppy golden masterpiece), and 961′s ‘Black IPA’ (a serviceable malty, balanced beer that’s never overwhelming).

With some of these pours now slugged down, we made our way toward the back of the main room for plates of ‘Bourbon Flavored Bacon‘ and ‘Apple Cinnamon Bacon.‘ Smoke arose from our plates with the piping hot cuts of fatty pork tasting delectably sweet and savory. Fortunately the staff wasn’t shy about doling out samples as we returned time and time again for more thick cut slices of tender deliciousness. We were pleased to see the return of Laurel, Maryland’s Kloby’s Smokehouse to the Beer, Bourbon & BBQ Festival with their outstanding mason jars filled with tasty hunks of pulled pork, cole slaw, baked beans and some tangy barbecue sauce.

After we filled our bellies, it was time to resume making a dent in the list of beers and Ommegang’s ‘Rare Vos’ has been among our craft beer staples for the past few years. The Belgian style pale ale is amber in color with delicate notes of caramel and a crisp sweetness that exudes from each medium bodied sip. Their ‘Three Philosophers’ meanwhile yields a much fruitier nose and an array of different flavors in taste, but is far too malty for our palates, despite its substantial critical acclaim. Cisco’s ‘Whale’s Tale IPA’ was another new taste for us and the session pale ale did not disappoint with its drinkability as a mild ale. The taste was decisively hoppy and smooth without being overbearing, and delivered as solid a first impression as we could have hoped for.

Whether you gorged on bacon grease and chunks of tender hog or you overindulged on some terrific southern bourbons, the Beer, Bourbon, & BBQ Festival once again delivered an outstanding event to masses of New York City locals. The selection of participating breweries and vendors was diverse and often, quite delicious. And by the time we stumbled back out into a snow-covered Manhattan night with trace amounts of sweet red sauce on our cheeks, grease on our fingers, and spilled beer staining our shirt we realized at that very moment, that we were completely satisfied, courtesy of another festival celebrating some of the few guilty pleasures that we enjoy in life.