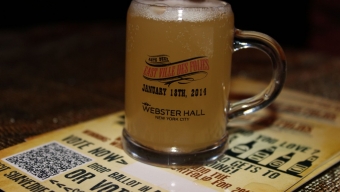 Built in 1886, Webster Hall has been utilized as one of New York City’s most diverse venues for more than a century. It’s hosted parties for F. Scott Fitzgerald. It’s been a speakeasy for Al Capone. It’s the birthplace of stereophonic sound. And more recently, it’s been a multi-room rock venue hosting shows large and intimate. Saturday afternoon, Webster Hall dug deep into its rich history, turning back the clock to the 1920′s for the 2nd Annual “East Ville Des Folies,” an event that brought some of the country’s best craft beers and whiskeys to the Hall’s many rooms along with the costumes, music, and dancing representative of an era in New York that’s long gone.

With tickets for the three hour event priced at just $45, its easy to see why the event was so well attended. Each of the ballrooms was filled with thirsty guests donning old world fedoras, flapper style dresses, and even distinctive makeup relevant to the time period. In the background, the live entertainment varied from room to room with burlesque and feather dancers throughout the space and big band music on the different stages. The highlights were the five piece Gelber & Manning Band, utterly captivating with their mix of vaudeville and early jazz music in the Grand Ballroom’s filled to capacity space and The Sunny Side Social Club, who had The Studio turned into an all out dance party led by the group’s accordion-led crooning.

When guests weren’t being captivated by the array of live performers- including the Double Lyra Trapeze Act floating overhead- they were itching for pours of tasty suds served seemingly at every corner. We began with fervor as we approached Empire Brewing Company’s outstanding “White Aphro,” a balanced malty wheat Belgian that drinks much lighter than that might imply. Hints of lemon zest prevailed with each tasty sip. Nearby, Harpoon Brewery’s “Long Thaw” was equally as eye opening- what with the flavor of fresh oranges and autumn spice despite an overall hoppy flavor profile.

We didn’t stick with solely fruity beers all day long however. The Lion “Stout” was a rich, chocolately dark brew, equipped with the requisite thickness and alcohol content that you’d hope to find. But it was the beer’s sweetness here that stuck out upon our first taste. Meanwhile, Fire Island Beer’s “Frozen Trail Ale” made first time believers out of us. The collection of spices and the deep caramel flavor came together brilliantly and was among our first repeat pours of the afternoon- savory and drinkable at once. Our favorite pour of the day came courtesy of Coney Island Brewing Company and their always terrific “Mermaid Pilsner” – equipped with subtle spices and citrus, ideal for an everyday beer and equally as tasty as their new “Seas the Day IPL.”

In a fitting tip of the cap to non-beer drinkers, there was also a preponderance of different ciders to sample. From new tastes like Badass Hard Cider (“One Bad Apple”) and Rekorderlig (“Strawberry-Lime”) to old favorites like McKenzie’s and Woodchuck, there was plenty to offer the gluten-free drinkers. Aside from many of the more familiar brew houses, we also slugged down some micro-breweries worthy of our praise. Sea Dog Brewing’s “Wild Blueberry Wheat Ale” was especially refreshing with the tasty Maine fruit prevalent from nose to finish. Sticking with fruit, we also thoroughly enjoyed 21st Amendment’s “Hell or High Watermelon,” another wheat beer that avoids being overly sweet with a perfect amount of summery flavor even in the darkest of winter months.

With so much beer under our belts, we pushed ourselves to sample some of the dozens of whiskies being poured and we kicked that off with an old friend. Jim Beam is one of the easiest to find brands in the country and yet, their “Signature Craft Brandy Finish” was somehow a blend that we had missed. Delightfully sweetened with vanilla spice and caramel, the bourbon was remarkably smooth- a palate pleaser for sure. Whistle Pig’s “Boss Hog” was also a big time winner. The single grain rye is aged a touch over 12 years in oak barrels and proved an exceptional foray into the many whiskeys on hand. Before leaving The Studio space though, we made sure to hit an old staple- Bulleit Bourbon- and downed a few repeat pours, before being on our way.

There was admittedly some culture shock being back out on the New York City street what with women in strange 2014 clothing reading messages from their smart-phones. After a bit of time, we managed to get re-acclimated to our surroundings but look back fondly at our experience at “East Ville Des Folies,” a now annual excuse to get dolled up in some throwback clothing, kick back with some friends, and toast your small tasting glass to the good ole days.