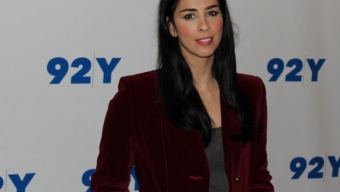 She’s had stints on legendary shows like Seinfeld, been a writer and featured player on Saturday Night Live, has made appearances in dozens of film and television projects, has had her own show on Comedy Central, and is perhaps the country’s most well known female comedian. She’s Sarah Silverman, a comic who combines everyday good looks with girl next door sex appeal and the language of a foul mouthed truck driver. And Wednesday night, Silverman joined bestselling author and writer Andy Borowitz on stage at the Upper East Side’s 92Y for a candid conversation about the comedian’s life, career, and the pursuits of one of Hollywood’s funniest people.

With a brand new stand up comedy special set to air on HBO called “We Are Miracles” (11/23), a follow up to the unrelated but equally as devoutly titled “Jesus Is Magic” (2004), Silverman seemed particularly down to earth on this night, chatting openly and casually with Borowitz, who was probably funnier than given credit for during their hour long discussion. The talk focused mostly on Silverman’s upbringing and family life, delving toward her comedic influences and her initial forays into the world of stand up. Claiming to have grown up in a house with ‘no filter’ as the youngest of four sisters, she credited her ability to be comfortable in front of people a result from her father who seemingly would curse fairly often. Said Silverman, “At a very early age, I found the rewards of shock,” something that would so clearly be integral to her success much later in life.

Borowitz to his credit kept the conversation relatively light and topical, avoiding the more salacious questions about her dating history and despite the fact that much of the hour was all over the place. But fans in a jam packed auditorium seemed genuinely intrigued by the former NYU student- a non-religious Jew with an older sister that’s also a Rabbi- often times exploding with belly laughs at the comic’s mannerisms and familiar cadence. But that’s not to say that the pair didn’t also touch on some questionable material that included but wasn’t limited to- the appropriateness of using the word ‘retarded,’ her notorious Ted-X segment that had been harshly critiqued for her subject matter (mentally challenged children), and her use of marijuana which candidly has left her with “very few vivid memories.

Perhaps the most interesting part of the revealing conversation however was the assembled crowd at 92Y, ranging from the middle aged and elderly to the young and in the know. Certainly she has her detractors, but with the Q&A portion of the evening catering to much of her work on The Comedy Central Roasts and work on viral web videos, it’s clear that Silverman is a comic that reaches a far broader fanbase than one might anticipate otherwise. Where the talk may have failed to produce a big reveal to the audience, it certainly built up anticipation for her upcoming HBO special. Filmed inside of ‘The Little Room’ at Largo’s in Los Angeles, just 39 lucky members filled the space for what Silverman calls ‘just a stand-up set.’ But don’t expect to see the same rehashed material from year’s past, because in her own words “['We Are Miracles'] is different because I’m different. This is much more straight forward” and “I was playing a character then.” With a recently shot HBO pilot alongside Topher Grace and Patti LuPone called “People in New Jersey” on the way, there’s a good chance that we’ll be seeing a lot more of Silverman on the small screen, in a vehicle that truly suits the person that she’s become. It’s rarely a good thing for a funny person to find a sense of maturity, but something tells us that Sarah Silverman is nowhere close to being done with the ‘dick’ jokes.