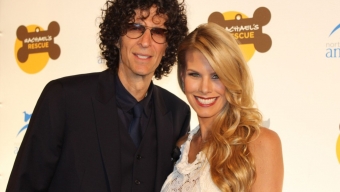 The largest no-kill animal rescue and adoption organization in the world brought together some of the biggest celebrities in show business for a star studded gala event at the posh Waldorf Astoria on Friday night. The Long Island based North Shore Animal League rolled the red carpet way out for their ‘Animal League America’s Celebrity Gala‘ honoring the efforts of a select few and celebrated by some truly exclusive company. With hundreds of philanthropic guests attending, the evening would serve to launch the nonprofit’s largest life saving project in history, titled “Bianca’s Furry Friends Adoption and Wellness Center,” named in memory of Bianca, the since deceased bulldog of celebrity parents Howard and Beth Stern, the evening’s Gala Chairs.

The event’s festivities kicked off before 7pm as guests were welcomed to mingle during a particularly ritzy cocktail hour, a precursor to the evening’s presentation, full dinner, and some noteworthy performances. Live entertainment would be performed by America’s Got Talent phenomena like comedian Tom Cotter and Kid the Wiz, who can literally flip his hat from his foot to his head as well as The Dixie Chicks’ Natalie Maines, an accomplished performer and friend to the Stern Show. Moderated by Hot 97 jockey Peter Rosenberg, the evening would also serve to honor the work done by television chef and personality Rachael Ray for her lifesaving efforts and for ‘Rachael’s Rescue,’ a foundation that highlights animal rescue across the country.

With the prospect of building a new adoption and wellness center at the Animal League America space, the organization pulled out all the stops in attracting celebrity guests to the event to bring some much needed attention to their worthy cause. Fans of SiriusXM’s The Howard Stern Show would certainly have felt at home with regulars like comedian Lisa Lampanelli, show producer Gary ‘Bababooey’ Dell’Abate, and actor George Takei and husband Brad walking the red carpet. Each of the celebrities took a few brief moments at the step and repeat on their own, before posing with some of the most adorable dogs that you’ll ever see amid the flashbulbs lighting the room around them.

Other notable guests included personalities from the culinary world like chef Rocco DiSpirito and Katie Lee as well as television personalities like Matt Lauer with wife Annette, Zach Braff and girlfriend Taylor Bagley, Kathryn Erbe, NBC Channel 4 anchor Chuck Scarborough and wife Ellen, and actor John Stamos. But candidly it was Stern and his wife that made the grandest entrance of all.Â  Beth to her credit seemed the most at ease in front of the paparazzi, unsurprising given her modeling background- but Stern himself was the most captivating figure- the familiar booming radio voice filling the entire room upon his arrival. The larger than life celebrity couple posed graciously, answered some brief interview questions, and then were ushered back out toward the dining area for an evening of dinner, dancing, and entertainment that awaited them.

Despite the awe inspiring list of celebrity guests, the North Shore Animal League works to save animal lives on the remaining 364 days of the calendar year and there’s always more room for help. Find out how you can adopt a pet or make a donation that can change the lives of these helpless creatures at animalleague.org. If it’s worthy enough to bring this list of celebrities out of hiding, it’s certainly worthy enough for fifteen minutes of your time.